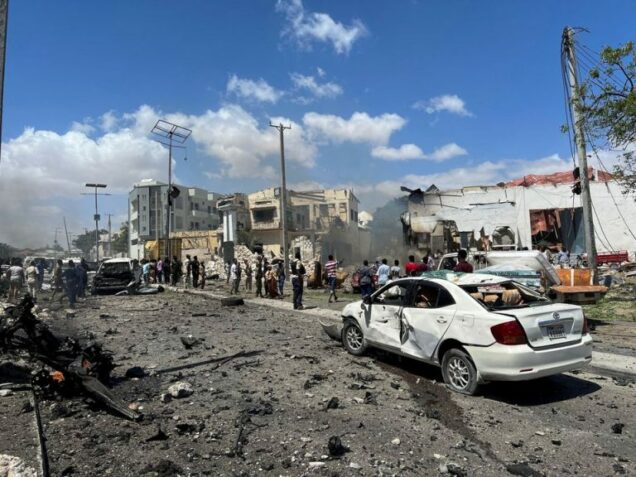 File: scene of an Al Shabaab bomb attack in the Hamarweyne district of Mogadishu, Somalia in January 2022

“We were awoken by huge blasts early in the morning. The blasts were at the African Union mission base. Heavy exchange of gunfire followed,” local elder Mohamed Nur told Reuters by phone from El Baraf, about 130 km (80 miles) to the north of the capital Mogadishu.

Al Shabaab, which has been fighting for years to topple the central government and establish its own rule based on its strict interpretation of Islam’s sharia law, claimed responsibility for the attack.

“The Mujahideen launched a pre-dawn raid on an ATMIS (African Union Mission) military base in El-Baraf, middle Shabelle region,” al Shabaab said in a statement.

“After a fierce firefight, the Mujahideen managed to overrun the base and are now in complete control of the entire military base.”

Officials in Shabelle and the African Union mission were not immediately available to comment on the attack.

Al Shabaab frequently carries out bombings and gun attacks in Mogadishu and elsewhere as part of its war against the Horn of Africa country’s central government.