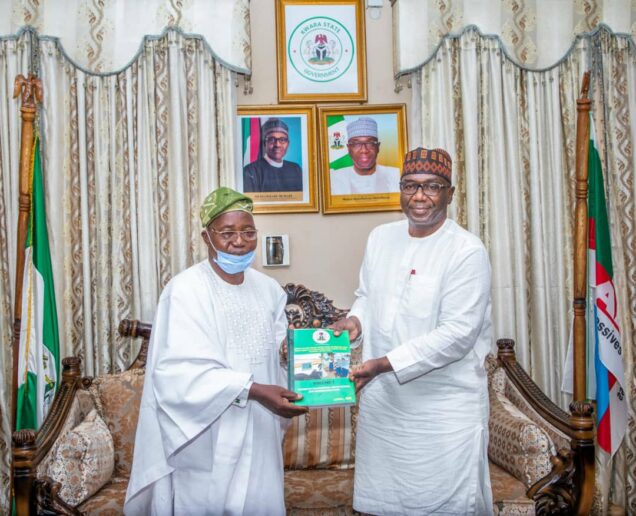 Oyun Baptist High school in Ijagbo area of Kwara state has been mired in controversy and its hitherto peaceful face distorted over the wearing of hijab.

The already tense situation degenerated into a violent crisis which led to the loss of one life, many injured and the destruction of property some months ago.

The Kwara State Governor AbdulRahman AbdulRazaq, however, in a bid to maintain peace, had earlier shut 10 schools, including OBHS, and later constituted a panel of inquiry on the crisis.

While receiving the report last Thursday at the Presidential Lodge in Ilorin, the governor thanked the panel, which among other things recommended a periodic interfaith dialogue, for a job well done.

“The report will be a roadmap to peaceful coexistence in our public schools, not only on Hijab but on other conflicting inter-faith matters.

“From what you have said before we read the report, it is obvious you have done a thorough job. We thank you very much. You have done good work. It’s not an easy job. We do understand the sensitivity of the issues and we ensure to do what is right”, the governor maintained.

Ensure to do what is right? The question many are asking is: Who decides what is right, when the matter is in the Supreme Court?

Still, another question many are asking is whether the report will actually be a roadmap for peaceful co-existence in public schools in the state, as the governor envisages, when the issues arising from the hijab crisis have yet to be decided by the Supreme Court.

Many are of the view that since the matter is still in the Supreme court, the governors’ decision to carry on with government policy and the panel report concerning the crisis is tantamount to putting the cart before the horse and disrespecting the rule of law.

History, it seems, is repeating itself, as the Kwara State government had, while trying to find solution to the crisis continuously shown disrespect for the rule of law, thereby compounding the crisis.

This was the point the Church of Nigeria (Anglican Communion) Ecclesiastical province of Kwara raised last year in a statement signed by the Archbishop of Kwara , the Most Rev Israel Amoo. But it seems those issues are reading their heads again.

The statement read; “Furthermore, we are aware that there is a matter in the Supreme Court concerning these schools , as law abiding citizens we ought to maintain status quo pending the outcome of the matter.”

“In the same vein, human rights lawyer Ebun-Olu Adegboruwa, SAN, in his piece Who Will Save Kwara published in the Guardian of 16 February 2022 : said: “Whatever the merit of the said case, the best option is for parties thereto, to await the final determination thereof, in the interest of peace and tranquillity.

“It is thus surprising that one year after, Kwara State is still struggling to resolve the hijab controversy, which is an indication that the government is yet to get its acts together. Amongst the many problems of Kwara State, religion and dressing of students should be the least concern of the government.

“I take it that the government of Kwara State has only gotten itself immersed in this controversy purely for political capital, at the expense of the combatants themselves, which underscores my earlier reference to the crisis of leadership between the Governor and the Minister.”

The Kwara Baptist Conference had also advised the Kwara State government to respect the rule of law concerning the hijab crisis in the state.

A statement by the Kwara Baptist Conference, issued by the President, Revd. Dr. V.S.A Dada, described the action by the state government as “committing contempt of court.”

The Conference said the issue of hijab is before the Supreme Court and that a High Court had ordered that the status quo which existed before the issue should be maintained.

“It is on record that this issue is before the Supreme Court of Nigeria. Therefore, the pronouncement of the state government closing religious bodies schools (is) sub-judice and as a result committing contempt of court.

“Equally, the state High Court has issued an order that “status-quo-ante” be maintained. That is to say that both parties should return to what was obtainable before the present crisis.

“Consequent upon the foregoing, we request the following from the State Government: Immediate reopening of our schools forthwith.”

The Baptist Convention has been unequivocal in its demands that the State government should hand over schools previously owned by religious bodies to it original owners or allow the schools themselves of to enforce laws guiding those schools.

“What we are saying is ‘give us back our schools’. But if the state government is bent on running the schools, we want to say we will henceforth not allow Hijab nor Muslims in our schools,” the convention maintained.

Though the governor has said he is in a hurry to reopen the schools. But this may be coming rather too late as the final year students of the affected schools are scheduled to sit for their WAEC exams in May.

In an open letter jointly signed by Chief I.O Ajayi, Atunluse of Ijagbo Land: Chief S.B Adisa, Mayegun of Ijagbo land and others including leaders of the Baptist Church in Kwara and published in Punch of 3 April 2022, an appeal was made to the state governor reopen the schools immediately.

“However, we are constrained to make this appeal, in the light of the fact that ordinarily the final year students , by now ought to be at the peak of their preparations for their WAEC exams which comes up in May, 2022.

“To the best of our knowledge, the crisis in the school was occasioned by the conduct of about seven students out of a student population of about one thousand, eight hundred’.’

The traditional and religious leaders also condemned government meddling in the issue and taking laws into its hands when the case is before the Supreme Court, adding that it was because of government continually defying the courts that led to the aggravation of the crisis.

“The question that agitates the mind, is: Why the Kwara State Government will choose to defy the courts, to the extent of laying the foundation for the unfortunate crisis that occurred at the OBHS on 3 February 2022?

“A law abiding Governor and Government, as the Kwara State Government, ought to have stayed further action and await what the court will decide,” the letter reads