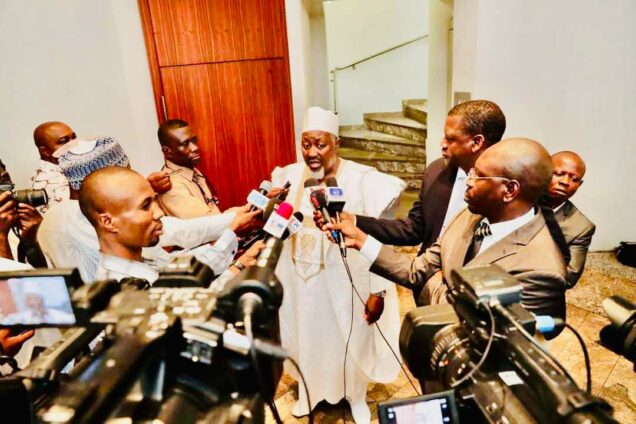 Governor Muhammad Badaru Abubakar has officially joined the race for the 2023 presidency on the platform of the ruling All Progressives Congress (APC).

The Governor of Jigawa State has also acquired the N100 million nomination form.

Governor Badaru told, APC stakeholders in a meeting held at Government House Dutse on Tuesday evening, that he joined the presidential race because he is highly qualified.

He said: “I will join the Presidential race since everyone knows I’m a highly qualified person to do the job”.

“As the Executive Governor of Jigawa State, Alhaji Muhammad Badaru Abubakar became a pivotal figure in the history of Jigawa State. His achievements in office have made him one of the most transformative Governors in Nigerian history of the past hundred years. He took office with a state in peril and led it through the most prosperous state in the country. In the 2015 campaign, he contested on the platform of APC which stood for change and eight years later we are living in a more prosperous state because of it.

Badaru embodies the good-natured side of the Nigerian character.

Governor Badaru has made Jigawa State a welcoming place for people, for visitors, and for the have-nots; and the have-nots became the primary focus of his administration.

Badaru’s patience and persistence paid off as he governed over one of the poorest States and took it to one of the most prosperous ones by demonstrating decisive leadership.

In the last six years, Governor Muhammad Badaru Abubakar led administration has pursued the transformation of the governance landscape in Jigawa State with unparalleled vigor and dedication leading to sustainable development across all sectors of the economy. Indeed, the numerous milestones achieved by Governor Badaru-led administration is better appreciated with a deeper understanding of the enormity of challenges inherited on assumption of office in 2015. The administration met an almost empty treasury, with a meager balance of N16million. In the same vein, financial liabilities bequeathed by previous administrations stood at N110billion, creating a hopeless and extremely precarious fiscal situation that could have crippled any administration. This dire situation was further exacerbated by declining fiscal receipts to States at the peak of the recession that ravaged the Nations’ economy, coupled with extremely high costs of governance and an environment of fiscal uncertainties. Despite all this, Governor Mohammed Badaru led his team to weather the storm created by this quagmire with an astounding commitment to the delivery of public goods and services. As a first step, innovative financial management approaches were adopted to significantly reduce the cost of governance and block leakages, leading to significant savings in the cost of overheads across Ministries, Departments, and Agencies of Government. As a testimony to this, various rankings by national and international bodies have consecutively ranked Jigawa as the most transparent State in budget transparency in Nigeria. For the first time in the history of the State and probably Nigeria, most of the inherited financial liabilities inherited by this administration have been settled, while new projects are being initiated and completed across all sectors.

In the education and health sectors, for instance, the Badaru administration invested heavily in overhauling the infrastructure, which was near comatose at inception. Access to education and healthcare services have significantly improved, even in rural settlements. New schools and hospitals are being established to cater to the needs of the populace. The need to connect communities with the marketplace across the State and beyond prompted the State Government to embark on massive road construction and rehabilitation. Almost all the road projects totaling 716.5kms inherited by this administration have been completed while an additional 878.15km of regional, township and feeder roads awarded by the Governor Badaru-led administration are at different stages of completion. The economic diversification drive of the State Government is being pursued vigorously through a multifaceted approach. First of which is the introduction of innovative programs to improve the State’s productivity in agriculture and prepare the ground for medium and large-scale agricultural and agribusiness activities.

Second is the empowerment of the State’s active workforce with the right skills and resources to engage in market-driven economic activities that would improve Small and Medium enterprises in the State while the third focuses on promoting the State as a prime investment destination to attract medium and large scale investments across all sectors of the economy.

All of these have yielded the desired results as tremendous growth have being recorded in the economy. The highlight of this is the growth recorded in the State Gross Domestic Product (GDP) figures from N900billion in 2015 to a significant N1.4trillion in 2019.

Indeed this is the result of focused and innovative economic solutions provided under the leadership of Governor Mohammed Badaru Abubakar, who is himself a successful businessman and private sector inclined.

Against all odds, this administration has approached governance in an inclusive manner through the pursuit of policies that guarantee economic growth, and ensure sustained progress in the improvement of basic human development indicators.

The achievements of Governor Mohammed Badaru-led administration in Jigawa State over the last six years (May 2015 – May 2021) is a silent revolution led by the indefatigable leader of modern JIGAWA.

It is on this background, that Nigerians driven by the tripodal values of nationalism, innovation and a quest to build capacity in leadership have recently been extending calls to Governor Muhammad Badaru Abubakar to come out and join the race of other contenders to contest for the position of the President of Federal Republic of Nigeria in order to succeed President Muhammadu Buhari in 2023.

The group of professionals, business people and Nigerians from diverse ethnic divides whose sole desire is to see a reborn Nigeria bound by the common cord of brotherhood, irrespective of tribe, tongue and religion, said among the known gladiators and even from among those who are yet to make up their mind, Governor Badaru is the best man for the job.

As the clock ticks and the time counts down to the 2023 General Elections in Nigeria, all eyes are on who takes over the number one seat of the Federal Republic of Nigeria. Candidates from different parts of the country in their various parties are declaring their intentions and some others are still consulting with stakeholders in their parties, tribe, and ethnic groups.

At the moment, it seems all groups and age brackets are duly represented by individuals who have registered their interest in the mighty seat in Aso Rock. The youths and women are not left out and are a clear indication that more would come out.

Realistically, whoever would be taking over that seat is coming at a very challenging time, almost with no time to rest for pleasure. Insecurity, economic instability, banditry, almighty corruption, inflation, fuel scarcity, and subsidy issues are a few of the trials the country is faced with.

An adage says a tree cannot make a forest. Though there would be the big lion controlling everything, the lion still needs the elephant, giraffe, tiger, and every other entity of the animal kingdom. No matter how strong and capable the president could be, the issues are more for just an individual to handle. Capable hands are needed in various capacities, electives and by appointment.

Vision driven and target focused leadership that would help Nigerians particularly youths unleash their creative talents, innovative energies, and resourcefulness all of which make them excel overseas each time they have the opportunity are largely missing in the context of Nigeria’s good governance and Governor Badaru has already filled the void in good governance in Jigawa State.

Muhammad Badaru Abubakar is the right man given the courage and vision he demonstrated at Jigawa State, if supported, Badaru’s Presidency would offer 21st-century leadership that would guide Nigeria out of her current quagmire, as they are some notable metrics such as economic management, curtailing insecurity, fighting corruption and promoting innovation as the immediate needs of the nation. Badaru Abubakar has demonstrated appreciated capacities in governance in Jigawa State.”