(ICYMI)I don't know yet if there will be election in 2023: Adeboye 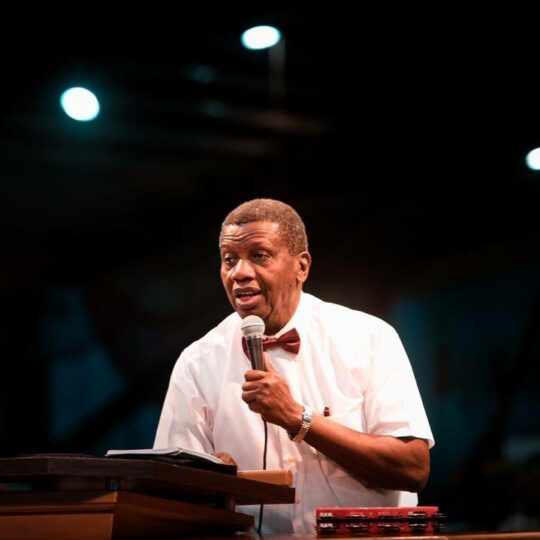 The general overseer of the Redeemed Christian Church of God (RCCG), in a recorded video played on RCCG TV on Wednesday, said he doesn’t know because his father (God) is yet to tell him anything about the election.

He said: “As of now, As I am standing before you, I still don’t know whether there will be an election next year. I don’t know because my father has not spoken to me about it at all. 2023 is still a long time away but he has not told me yet.”

Adeboye further joked that he is a pastor and anyone closer to God than him can come out to speak. He added that “but for me, I don’t know yet.”

The well-respected cleric also noted that he has never told anyone of his members whom to vote for if an election holds in 2023.

He noted that he is not a politician and will never be.

RCCG had created the office of the directorate of politics and governance to support its members interested in going into politics.

Many claimed the office was created to support Yemi Osinbajo’s ambition but Adeboye maintained that he is a father to all and support to one from him will be an injustice to his other sons.

“I understand that some people have been writing all manner of articles about instructions that have been passed to all members of the RCCG.

“Let me make it loud and clear, Pastor Adeboye is not and will never be a politician. I have never been and will never be. That’s not my calling. I am called to be a pastor. I am not even a prophet. I only hear from Him(God) once in a while.

“My assignment is to pray for you and nations, including Nigeria.

“My assignment has nothing to do with partisan politics. Don’t distract my attention.

“Those of you who are genuine members of the RCCG, I have never told you who to vote for.

“Have I ever said that — whether in secret or open?

“I have never said this is the party you should belong to. I will never say it. Because in the RCCG, every party is heavily represented: APC, PDP, APGA, LP, and some parties you don’t even know their names.”

Adeboye said although he has never voted, he encourages every member of his church and all Nigerians to go out and vote.

“The only reason I have never voted is that if I vote for anyone, I would be unjust to the rest of my children. I am the father of all and I like it that way.

“All I am saying, and I’m saying it loud and clear, you are Nigerians and you were a Nigerian before you became a Christian. You have a duty to your country to register to vote and to make sure that your vote will count.

“You have a duty to belong to any party of your choice at the very grassroots. You can’t sit down, fold your hands, refuse to vote, and then begin to complain about the government.

“What were you doing when they were voting?

“They were voting, you sat down at home, and you didn’t register. Then all kinds of people came out and selected for you a government whether at the gubernatorial level, presidential or local government. They chose for you because you refused to do anything.

“You must register, you must vote, you must sit down thereafter you have voted and make sure they count the votes and you take note of who they said won. You must make sure that there is no more rigging in Nigeria.”