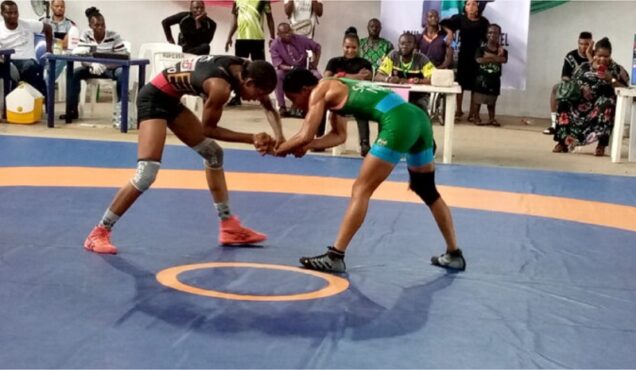 Sunday Dare, Minister of Youths and Sports said he was impressed by the performance put up participants at the maiden Gov. Diri National Wrestling Classics on Tuesday in Yenagoa.

Dare who spoke at the closing ceremony of the events said he was particularly impressed with the skills and level of competitiveness exhibited at the competition.

He said wrestling had continued to maintain its position as a leading sport in Nigeria, while wrestlers have been striving to get better.

“My last visit to Bayelsa was during the final trials and preparations to the Olympics in Tokyo.

“I did say it then that they would do us proud and indeed wrestling gave us our highest medal.

“The first Olympic medal in wrestling in the history of Nigeria. Even then I had no doubts in mind that Bayelsa would continue to remain the capital of wrestling in Nigeria and today’s event is a testimony to that.

“I thank the governor of Bayelsa for his love in wrestling in the state and in Nigeria. He followed in the footsteps of his predecessors.

“The wrestling glory of our country Nigeria is planted solely in Bayelsa.We have seen our stars come from the nook and cranny of this state, we’ve seen it attract some great talents across the country.

“This tournament is a testament that Bayelsa is the wrestling industry for Nigeria. I thank all athletes that took part in the competition.

“Having 28 states and 16 clubs compete is highly commendable and laudable for a maiden edition of a tournament and this is a massive success with over 300 wrestlers.

“This is heart warming, inspiring and the future is indeed bright for wrestling in Nigeria. This tournament had 39 categories and it’s a huge one.

“It gives me joy to see that Olympian Odunayo Adekuoroye now has a younger sister in person of Mercy Adekuoroye, also wrestling and won a gold medal.

“This is a good development that she’s toiling in her sisters step. It gives me joy that Olympians and national champions took part in this competition and its indeed a true classics.

“I thank the governor for this opportunity given to our athletes to get more experience,” he said.

He expressed confidence that from here selection of those to represent Nigeria in the next two weeks at the African Championships in Morocco would be made.

“Also those that will fly our flags at the Commonwealth Games in July would be selected.

The competition commenced on April 29 at the Samson Siasia Sports Complex.

The competition had participants from 25 states, including FCT, 16 clubs, which included both military and para military.