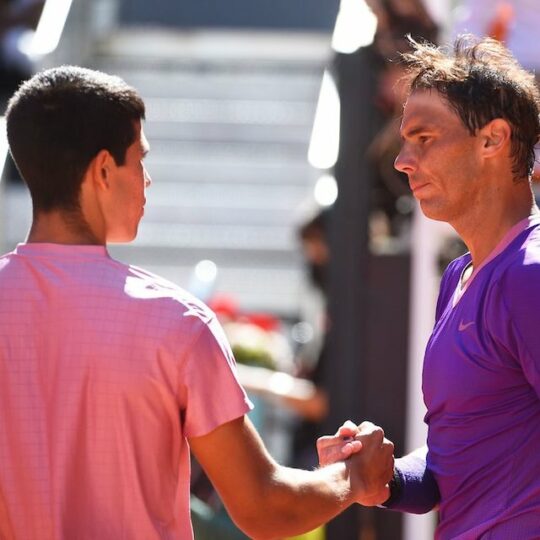 Carlos Alcaraz playing on his 19th birthday on Thursday, recorded a hard-fought 6-4, 6-7(4), 6-3 victory in Manolo Santana Stadium, against Cameron Norrie at the Mutua Madrid Open.

The win sets up an all-Spanish quarter-final showdown against his hero Rafael Nadal.

It also lifts Alcaraz to a career-high of No. 7 in the Pepperstone ATP Live Rankings.

He will rise to No. 6 on Friday if he beats Nadal and Andrey Rublev falls to Stefanos Tsitsipas.

The ninth-seeded Norrie fought Alcaraz close throughout, breaking serve once in each of the first two sets and creating four break chances in the third, but was never able to edge in front in the match score.

Following the victory, the birthday boy was serenaded by the Spanish crowd on centre court and enjoyed a special presentation complete with a birthday cake and sparklers.

But his favourite present must be the one he earned himself — that meeting with Nadal on Friday.

“I lost twice against him and I wanted to play against him the third time,” Alcaraz said of the marquee matchup.

“I think it’s going to be different from last year [in Madrid] and the last match that we played [in Indian Wells].

I’m excited to play against Rafa here in Madrid in front of the Spanish crowd. It’s going to be a great day and a great match.”

Asked how he can earn his first ATP Head2Head win against his countryman, a respectful Alcaraz exuded a quiet confidence: “Honestly, I don’t know. I always say that he has 1,000 lives. He dies and he survives, in every tough match for him,” Alcaraz said after watching Nadal save four match points to advance to the quarter-finals.

“I think if I play a pretty good game, I’ll have chances to win.”

Alcaraz was at No. 120 in the Pepperstone ATP Rankings when he met Nadal for the first time one year ago, but enters their latest matchup as the newest member of the Top 10 and as a Masters 1000 champion with a 25-3 tour-level record on the season.

Alcaraz will be competing in his third ATP Masters 1000 quarter-final, having denied Norrie his third appearance at the same stage.

All three of those runs for the Spaniard have come in 2022, viz Indian Wells semi-finals and Miami title.