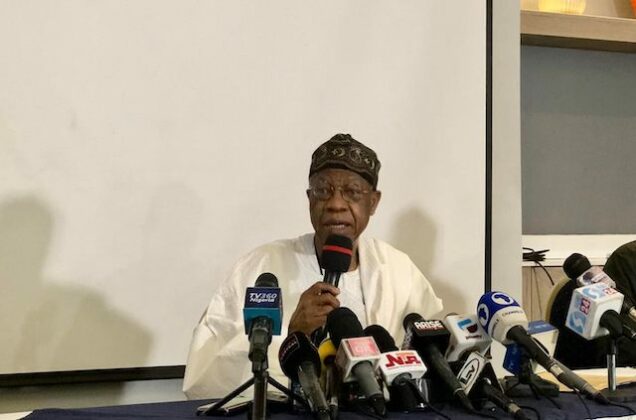 The Minister of Information and Culture, Alhaji Lai Mohammed has described “Blood Sisters’’, the first Nigerian series on Netflix00 as a big plus for the nation’s creative industry.

The minister said this in Lagos at the premiere of Netflix’s Nigerian four-part thriller series created by Temidayo Makanjuola and directed by Biyi Bandele and Kenneth Gyang.

Mo Abudu, the Chief Executive Officer (CEO) of EbonyLife Studios, venue of the premier, is the Executive Director of the series.

Speaking with NAN after the premier, the minister said apart from the quality of the film, it was significant that “Blood Sisters’’ was the first series in Nigeria that would be shown on Netflix.

“As you are aware, Netflix is an international streaming service, a platform where we have about 242 million subscribers from 190 countries.

“What this means is that 242 million subscribers will be watching this series which is about our environment and the setting is in Lagos.

“I believe it is a big plus for our creative industry.

“It is not easy to get your movie on Netflix not to talk of series which is a movie in many parts.

“To me, this is an indication that our creative industry is going places,’’ he said.

On the moral lessons of the series, Mohammed said it depicts the society of today, where the emphasis was placed on materialism and its negative consequences.

“On one hand, we see the family of the bride overwhelmed by the material wealth of their in-laws while on the other hand, the groom’s family is looking down on the bride’s family because of their greed.

“In between is the young bride confused in one hand and wants to retrace her steps and as long as she loved to run, there is a mistake on her side

“More shocking is how desperation can push someone to become something else completely.

“It is a gripping story that I can’t wait to watch the other parts,’’ he said.