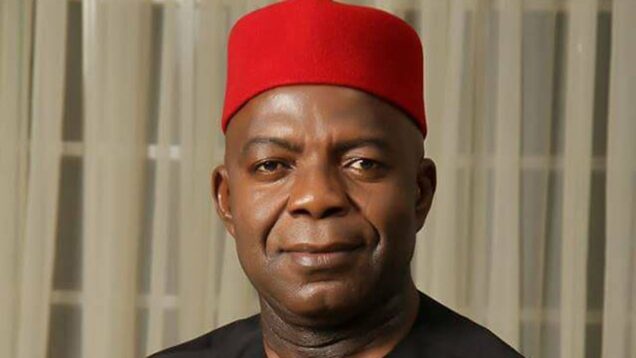 Dr. Alex Otti said he joined the 2023 governorship race in Abia State to address infrastructure decay and to rescue the state from debts.

Otti, who is running under the platform of the All Progressives Congress (APC), told newsmen on Wednesday of his mission after picking the nomination and interest forms in Abuja.

According to him, Abia needs a person with the requisite skills, training, and competence to save it from a complete collapse.

Otti, a former Managing Director of the defunct Diamond Bank said that the ruling Peoples Democratic Party (PDP) in Abia had not done enough in the state.

According to Otti, Abia has plunged into huge debts, civil servants, and pensioners among others are hugely owed by the state government.

“If you have been following my politics, you will understand that this is not the first time that I am coming out to run. I ran in 2015 under the platform of APGA; in 2019, I tried again and it didn’t go well.

“If you know what is happening in Abia, the level of infrastructural decay, the level of debts, and the amount of money being owed to contractors and civil servants and pensioners, then you will realize that Abia needs to be rescued and that is why I am here.

“I am happy that a lot of people are showing interest. I found that out that three more people have picked their forms and I believe that it’s going to be an interesting race at the end of the day, I know that the people of Abia will make the right choice.

“PDP knows that they are on their way out, they know in their heart when they look at what they have done to the state in the last 24 years.

“I am sure, they would have given themselves a quit notice; in fact, this last administration had signed off on that quit notice because they actually did not do anything.

“I do not have any fears but of course, when you go into a race, it is either you win or you lose; when you have great chances of winning, then you should not entertain fears, I am sure I will get it,” he said.

Otto said that the people of Abia want a leader with the capacity that would address infrastructure decay in the state.

Otti recommended that the APC should adopt either a direct or Indirect mode of primary elections for choosing candidates.

He also called for unity in Abia APC to enable the party to win the 2023 governorship election.

Otti urged the party faithful in the state to stand against interest groups trying to balkanize the party and stand together to better the chances of the party.