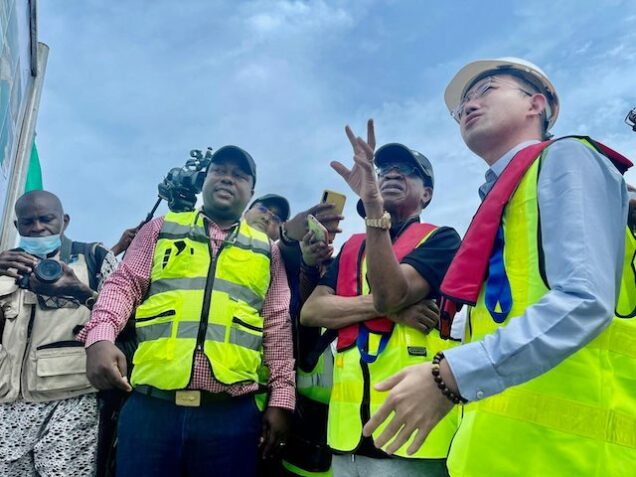 Lai Mohammed, second right during his visit to the Lekki Deep Sea port

Nigeria’s first deep seaport will create up to 170,000 jobs and bring revenues totaling $201 billion to the state and federal government.

The money will come through taxes, royalties and duties, Lai Mohammed, the minister of Information and Culture, has said.

The port project was critical to the nation’s economic development, Mohammed told reporters in Lagos, Nigeria’s economic hub, during a routine tour of the port under construction Wednesday.

The Lekki Deep Sea Port, which is being constructed by China Harbour Engineering Company Ltd. (CHEC), is being built at the centre of the Lagos Free Trade Zone, approximately 60 km east of Lagos. It would be the first deep sea port in Nigeria upon completion.

The minister, who described the port as a game changer for the nation’s economy, said the visit was the second the federal government has made to the area within a month because of the importance the administration attached to the project.

“It is the deepest seaport in Nigeria and West Africa, and that is a unique advantage,” he said.

“It is also a big boost to Nigeria in its quest to take advantage of implementing the African Continental Free Trade Area Agreement (AfCFTA).”

Mohammed expressed satisfaction with the level and quality of work on the port and said that the project was done in phases, saying Phase 1 had reached 89 percent and would be completed in September 2022.