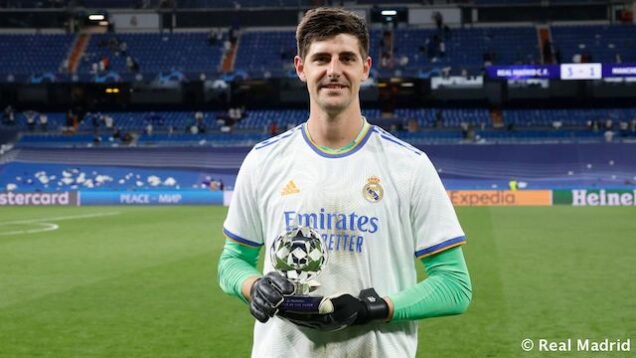 Goalkeeper Thibaut Courtois was named man of the match in the clash Wednesday night between Real Madrid and Manchester City at the Santiago Bernabéu.

Excited after Madrid made it to the final in Paris, Courtois said his team will beat Liverpool.

“We can’t wait to play the final. When Madrid make it to a final, we go there to win it”, Belgian Courtois said.

Both teams played in the 2018 final, with Madrid winning the trophy.

Courtois on Wednesday delivered a faultless performance, making decisive saves on the way to guiding his team to the win and the final in Paris: “This team and this club are capable of anything. We kept believing until the end and ultimately we made it possible”.

“We knew we were in better shape going into extra-time, it was a case of digging in and defending well, which is what we did. We weren’t great in front of goal today, we were missing the final pass and sometimes it feels like it won’t go for you, but with the goal and the fans behind us we knew anything could happen”.

“We’ve knocked out some great teams along the way, like PSG, Chelsea and today.

“It was in the final couple of minutes today which was unbelievable but we know anything is possible when we play at home”, he said..