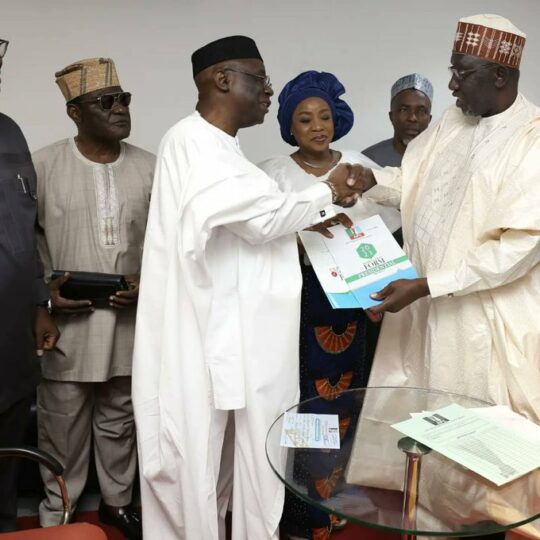 Nigerians on Thursday reacted to Pastor Tunde Bakare’s purchase of the All Progressives Congress’ N100 million presidential nomination and expression of interest forms.

Bakare joined the huge number of politicians that have obtained the APC presidential forms in Abuja on Thursday.

Tongues have begun to wag on social media. especially on Twitter where many felt disappointed over the action of Bakare, howbeit, some still supported his move.

According to Omidan, “Nigerians aren’t ready. You want the country to move forward yet you are complaining that Pastor Tunde Bakare bought the N100m nomination form to run for President. Under which party were you thinking he should run? PPA or ADC. So he can’t continue to do aspire to perspire.”

A twitter user, Mo-mo said: “I’m quite certain there are still poor members who have not eaten in his church.”

According to Iboko Paul, “My fear is that I am yet to understand what APC game plan is because I am certain that all these hopeless aspirants obtaining forms are part of the game. The question is, what’s the game?”

Dav wrote: “Pst Bakare knows he won’t get party’s presidential ticket. Even if he gets it, he can’t win the general elections. Yet he still went ahead to splurge a whooping N100 million on form. Just imagine what the N100 million can do for some of his church members who are going through hard times.”

Aji Bussu said: “This man is allegedly owing for his church building but has ₦100m to buy APC Presidential form. So he is a registered member of APC after masquerading all these years? It is his gullible followers I pity.”

Datour global wrote: “So he actually paid N100m to get this? My question is can someone like Tunde Bakare win the primaries without any political structure? Isn’t this a wasteful investment? Abi wetin concern me sef?”

Okuko Igbo stated: “So even a pastor has corruptly joined the step down form. Even as a novice I know everyone picking this form under APC is a way to remit laundered money or privileged money through government funds back to the party agenda. Failure to do so EFCC will be knocking on you. Kai.”

Godsent Erubhonmon added: “What if this Pastor Tunde Bakare is Mr. President’s favorite? Recall that he belonged to the defunct CPC with Baba where he was his running mate at a time. Hmm, time will tell! This is politics and anything is possible.”

Fasman_01 wrote: “100m when some members are not yet employ and they will still pay tithe despite they are jobless.”

Finewine asked: “Who are the people patronising this man’s Church. Gullible people shouting RIDE ON DADDY every Sunday and still go home hungry. Is it not this man that is still owing bank? But he has 100 million to purchase a form that he will definitely fail . Nawa.”

Adeyinka Tolulope added: “Even Pastor Tunde Bakare has N100m to waste. This country is a joke.”

Ifeanyi Aneke said “Pastor Tunde Bakare buys the 100 million naira APC presidential nomination form. Deep down he still believes that Nigeria’s presidency in this era belongs to him and Buhari. We are watching.”