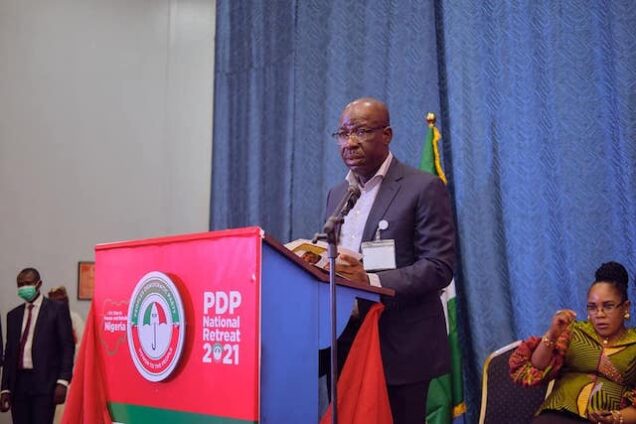 Governor Godwin Obaseki has urged leaders of the People’s Democratic Party (PDP) to shun the politics of bitterness ahead of the party’s primaries.

He made the call while addressing the 162 Edo House of Assembly (EDHA) aspirants and leaders of the party, drawn from the 18 Local Government Areas of the state.

According to him, the people should not be their own opponents but work together to achieve a common goal.

“We should be united and not be our own opponent; the way we go about this primary is very important, it will depend on what the outcome of the election will be.

“We have 24 seats in the EDHA and 162 people are contesting. In the end, the majority will not get the position. We have a long nine months to prepare and campaign, and the journey will not be easy nor cheap,” he said.

The governor said that aspirants should conserve their energy for this process and work in unity to win the forthcoming state House of Assembly election.

”Come 2023, PDP will select candidates to contest for the position against candidates from other parties.

“For contestation at this level, we can’t be our own opponents. We all will rally round to support those that emerge in the primary, and together we will win the election,” he said.

Obaseki called on party members to shun politics of bitterness that might be a fallout from the primary, but to unite to win the House of Assembly election and president of the Senate.

However, he urged aspirants should guard against excessive spending targeted toward winning an election because it would be dangerous when such aspirant does not win.

He assured all the aspirants of his neutrality in the build-up to primary elections, in spite of several calls received.

The governor called on the aspirants to be strong and not go into the contest weak.