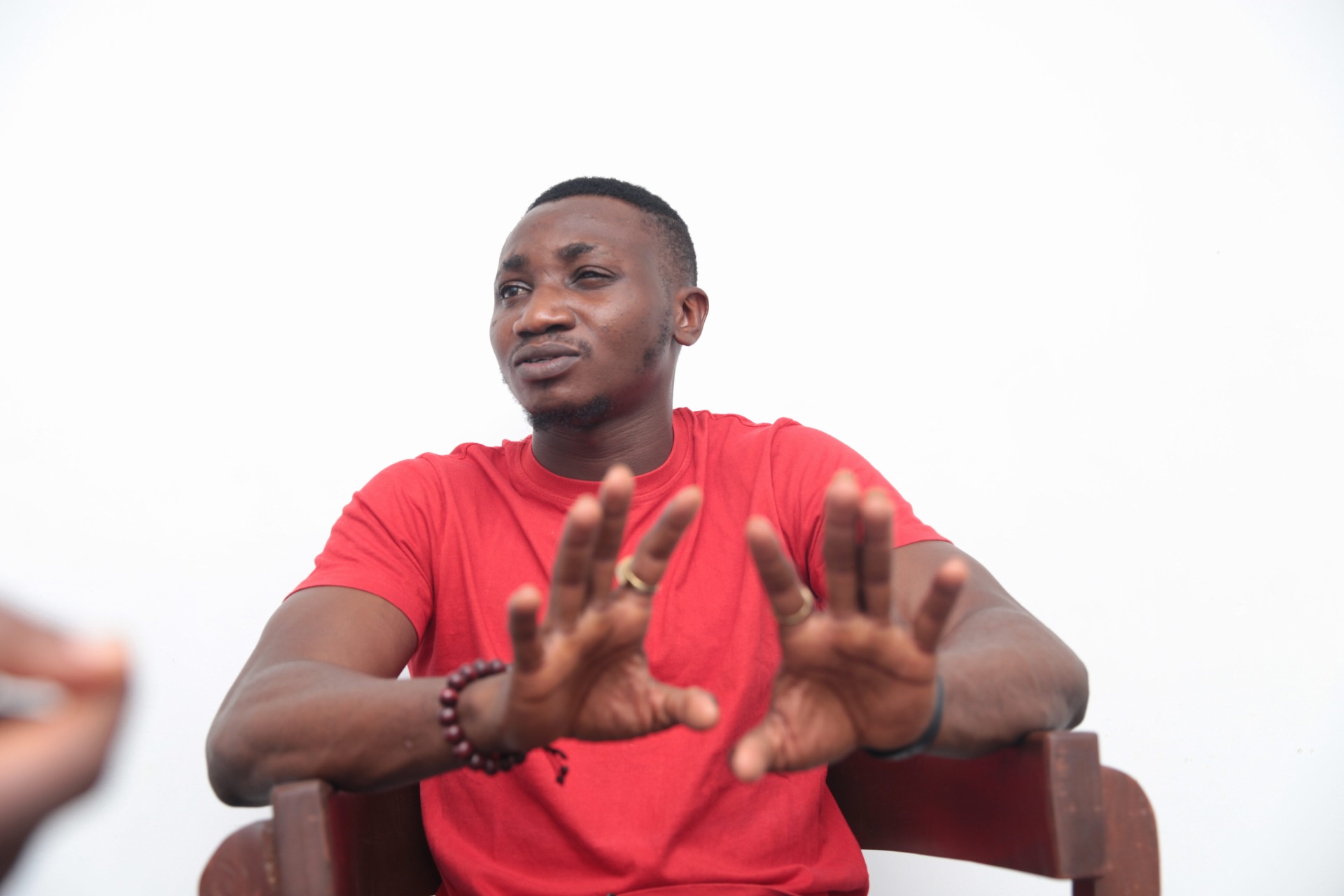 Away from work, Pam Pam has emerged as one of the leading voices in his generation.  He was a leading voice during the #EndSARS protest.

He has championed other struggles for social change in Nigeria and set up empowerment initiatives.

In this interview with Taiwo Okanlawon, Pamilerin talks about his growing up, how he met his mentor, Ayeni Adekunle 7 years ago, learning on the job, and becoming an expert in brand management, PR and digital strategies. He also speaks on  his involvement in the #EndSARS protest and others.

You studied Marine Engineering but you ended up in Digital Marketing and PR expert, how did that happen?

When I was done with school, you know people look for jobs and the rest of it,  but for me, I started going to conferences.  That was  how I met my former boss,  Ayeni Adekunle Samuel of Black House Media.

Then I went for an interview, not an interview per se, it was just like a question and answer thing. The only question he asked was my town or state of origin. He also asked about my field of study, my religion, whether I drink or smoke.  I can never forget those questions because I was just 19 in 2014 and I don’t do all those things then.

That was how it started. I was an intern for like six months. That’s where I learnt the job. So I basically learnt everything about the job in six months. Actually, I got to experience it for like 7 months before my appraisal was done.  I got 98%  in the appraisal  just like that.  It was the highest so far in the company. May be someone has 99% now, I don’t know. That was years ago.

What did you do as an intern?

Everything. Digital marketing, content management, Brief, at some point I was sourcing for contents for the company’s online newspaper, that was Net.NG.  I used to write for TheNet.ng and I was the head for Orin.ng. I was a graphic designer.

So basically, I was in all departments,  except the accounts department.

Tell us about your educational background.

After secondary school, I went to Maritime Academy. That was where I studied Marine Engineering. My education was straightforward. My siblings and I, have a very fast education.

How has it been so far since you left BHM?

It has been challenging. It  wasn’t like I wanted to leave. What happened, was that my boss called me one day and said I should quit or he was going to sack me.

I asked whether I have  done something wrong? He said no that I was doing my job perfectly,  that it didn’t  seem like I was  challenged anymore. My job had become a  routine. So he felt like I needed some challenges.

He asked me to quit,  that I should try something else.  He said  in six months,  if I didn’t  make  a headway,  that I should come back. He said he would  triple my salary.

That was the challenge he gave me. Glory be to God, in less than a month I started making waves.

Can you remember the first project you handled?

It was First Bank, I worked for First Bank. If we have hundred big brands in Nigeria,  I had probably worked with 95, the biggest ones.

You focused on entertainment PR or you do everything?

I do everything. In fact lately,  I tend to relax more in entertainment. My entertainment is probably just 10 percent. But there are many brands that I work with that I don’t post them.  I don’t even post 75% of the brands on my own timeline.  I outsource the jobs to influencers and the rest of it. I have people, managing people for me, so I don’t post most of it on my platform.

You’re the co-founder of LaCibo restaurant, what’s the motive behind going into food business?

I was already looking for what to invest in or something new to try. So, when my partner approached me that he has plans for this and he feels like we can do it together,  I jumped into it. I love new challenges, I love trying new things and it’s not being bragging, I have never failed.

So, I said why not, let’s try it and that was it for me, I like food, and what  came to my mind was that I will be eating free food.

How did you come about the name?

The name La Cibo means The Food, in Spanish.

Let’s talk about social media. Do we need a bill to checkmate the activities of social media users despite having freedom of expression?

Let’s be honest with ourselves.  There’s nothing we can do about it, and that’s the honest truth, it’s not just here, it happens all over the world.  There’s nothing. The more you try to curb it, the more the problems. So just do your thing, try as much as possible to put out the right information, verify contents before posting them out. It’s  a personal thing. You just have to make a decision  not to put out anything that is not verified.

There are some bodies for social media influencers and others but they are not working, why?

Well, because you can’t put everybody in a box. There are a lot of people doing this thing in a day, it’s a lot of people, maybe 100 new people are coming up every day, how do you want to control these people. Everyone has to have access to go Google. You can learn all these things online without even going to any school if you are dedicated, go for courses, how do you want to curb those things?

Even the so-called medical association, lawyers still have quacks ones, and these are professionals not until recent years that we started taking digital marketing as a serious business, growing up if you tell your parents I want to become a social media influencer, they’ll be like what’s that? Not until recent years people started taking it serious, like they know it’s a serious business.

So there’s no way we can checkmate it, it’s a long thing, it’s going to be very hard, they have not even tried it abroad, so you are now talking about Nigeria here. Maybe, if it works abroad, the next 90 years you can try it here but it needs to work there first.

Why can’t we have digital marketing courses in our curriculum?

I will rather let my children go to a business school than waste some 4-5 years here. If I had known all the millions I wasted in school, I would have gone to Lagos Business School or business school abroad where they would go straight to the point, not first of all spend 4 years writing theories that we are not going to implement in life.

So go to business school abroad if you have the money. Just go straight up, as long as you know what you want to do, go to an institute that teaches that thing.  I have a friend, he never went to any university. He went to a business school and he’s making it big out now. I have over 48 certificates in digital marketing and PR, none of them is a Nigeria certificate, I’m writing the 49th and 50th this year.

Social media was a huge factor during the #EndSARS protest and you were one of the leading voices during the movement, can you share  your experience?

To God be the glory.  I was one of the major guys in Alausa during the #EndSARS. It was great, and I would say that’s one of my proudest moments as a Nigerian youth because I could see it was genuine. People came out. It was one voice. It wasn’t a matter of I’m Igbo or Hausa.

I saw people bringing food, bringing water, and other things that people need, and it was the first time Nigerian youths  came together as one voice and with that, I felt like yeah, we can actually come together and make something happen if we actually want it to happen. If they don’t start bribing us, or we are not collecting N2,000 from our politicians,  we can actually make things happen if we want to.

You attended a zoom meeting that some big personalities called during the time, what was discussed at the meeting?

I was part of them.  How we all got to that was that different people called us, people we can’t say no to called and we got to the meeting. What they were asking was ‘you guys can’t continue with this protest, the government will listen,  give them time’, and we told them that we can’t stop the protest, there’s no leader. If the government says do this, we will do it but the people need to see changes. But we  can’t tell people not to protest and that was it for us, that was what the meeting was about.

There were many threats and freezing of accounts by CBN, how did you feel about this?

Our accounts have been unfrozen since and nobody can threaten me in my father’s land.

You have the courage to speak to the power, where did you get that activism spirit from?

It came from nowhere.  I just know that I could do it, nobody can threaten me in my Father’s land, I don’t depend on the government.

What is the way forward especially now that the 2023 Elections are on the way?

It’s now an individual thing, first, get your PVC or try and push those that you think they are capable of running, let them just come out and you vote without collecting money because whoever we vote in 2023 will determine how our next 4 years is going to be, maybe miserable or good. So it’s now left to us to choose our path and do ourselves a favour for the next 4 years.

Let’s talk about your relationship.

I am in a serious relationship for 2 years. This is my best relationship ever. I have  peace of mind. She’s a nurse. She doesn’t give me stress.I have been in some stressful relationships, but I have never given up on love.  I am a loving person.