They claim Buhari has done nothing. UN scribe, Antonio Gutteres, says not so 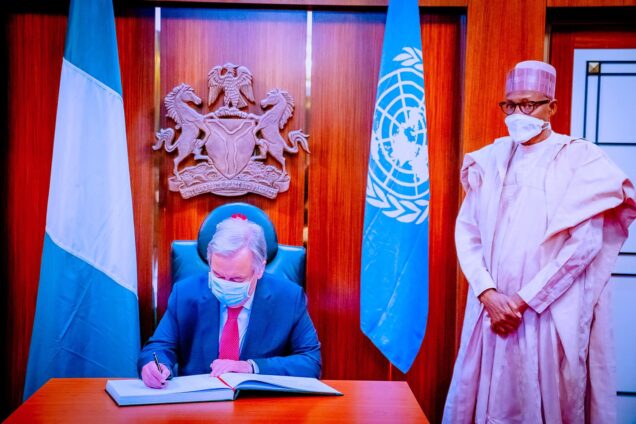 Buhari and UN Secretary General during the visit

The Yoruba people of South-west Nigeria have a saying: when a child rejects instructions at home, it is from outside that such child is trained.

And that was exactly what happened on Tuesday and Wednesday, this week, when United Nations Secretary-General, Antonio Gutteres visited Nigeria as part of a three nations African tour. He said it was “a visit of solidarity with all Nigerians, particularly the victims of terrorism.”

The UN Scribe was visiting Nigeria for the first time, and he had probably fallen for the antics of the Western media, and some unpatriotic Nigerians who have nothing good to say about their own country. They even visit the UN and parliaments of leading countries of the world, to de-market Nigeria.

Gutteres had probably thought he was coming to a country where hopelessness and despondency were order of the day. He started from Maiduguri, Borno State, once the epicenter of the Boko Haram insurgency in the country. When he saw what the Muhammadu Buhari administration, in conjunction with the Babagana Zulum government had done, he had a quick rethink.

At a meeting with President Buhari on Wednesday afternoon in Abuja, he declared: “I was extremely surprised. The image that exists is of a hopeless situation. But what I saw was a Borno of hope.”

I chuckled as the international public servant expressed his consternation. He said he visited a centre where former Boko Haram fighters were being rehabilitated, and also camps of internally displaced persons (IDPs).

“It is necessary to provide a vision of the future for the people. Vision of jobs, schools, health institutions, and the like. And that was what was being done. It is a remarkably wise and well conceived strategy.”

But the naysayers, the wailing wailers, always say President Buhari has not achieved anything in the country. They see roads, rail, bridges, airports, but they say he’s not doing anything. Well, like the contumacious child, who refused to take instructions at home, an outsider has come to tell them the home truth.

They say Nigeria is good for nothing. Gutteres says the country “is a pillar of continental and global cooperation-and a steadfast partner of the United Nations.” He added: “Nigeria is a country where Africa’s promise and potential come to vivid life.”

That is the same country that a clergyman, who should inspire hope and faith, says has been broken, completely destroyed and thrown to the dustbin. Well, when a child refuses to take instructions from home…

The UN scribe said Nigerians were fantastic people, and the country has “solid institutions, and a vibrant private sector.” But that is not what some ever cynical Nigerians say about their country, and that is not the picture they go abroad to paint of their country. Shame, I say again; shame.

President Buhari said Boko Haram was the major security challenge his administration inherited in 2015. “They will kill people, and shout ‘Allah Akbar,’ (meaning God is great). But when you do that it is either you do not know that God, or you are being stupid. God is justice, and you can’t take an innocent soul, and say God is great.

“We began to educate the people, and gradually, they understood that Boko Haram was not about religion. The group is largely decimated today, and government is trying to resettle the people. We are trying to get them back to the land, and things will get better in the near future.”

Yet they say Buhari hasn’t achieved anything. When your adversary sees your robust horse, standing in all its grandeur, he turns up his nose, and says; see this dwarf horse.

They have eyes and see nothing, they have ears and refuse to hear. Well, an outsider will one day come to tell them the truth.

The Secretary-General said the people he saw in Maiduguri “remain hopeful and committed to returning to their communities and resuming their lives.”

Still commending the Buhari administration, he welcomed “the establishment of the Presidential Committee on the Repatriation, Returns and Resettlement of Displaced Persons in the North-East.”

But to some of our people, the country is broken, destroyed, and nothing is working. Well, when a child refuses to accept instructions given at home, an outsider knocks sense into his head eventually.

Hear Gutteres again: “And I thanked President Buhari for his unwavering support of the Multinational Joint Task Force and the Lake Chad Basin Commission.”

Yet, to the permanent critics, Buhari is not doing anything, and has not achieved anything. I hear.

In 2011, Boko Haram bombed the United Nations building in Abuja, killed many people, and completely wrecked the structure. The Buhari administration undertook the rebuilding of the facility, and got it delivered in good time.
The Secretary-General described it as “an impressive edifice, “ stressing: “I want to thank the Government and people of Nigeria for not only hosting the United Nations, but for rebuilding and reopening the United Nations House in Abuja in 2019 following the terrorist attacks in 2011.”

That’s an outsider appreciating the good works of the Buhari administration, which the willfully blind have refused to see, and the deliberately deaf have refused to hear. If a child stubbornly spurns instructions at home….
Let’s conclude with this very inspiring one from Mr Gutteres.

“My trip to Nigeria is not to visit people in despair, but people filled with hope. When there’s political vision, good things can happen.”

If you have been deluded, brainwashed, hoodwinked into seeing your country as broken, destroyed, good for nothing, then begin to have a rethink. Those who fed you with that narrative have their own sinister agenda. Our country has challenges in security, economy, and other areas, yes, but it is neither broken nor destroyed. “If you don’t say you are, nobody would say thou art.”

President Buhari has worked for this country, and continues to work. Let not an outsider come and tell us the home truth that is right before our eyes.