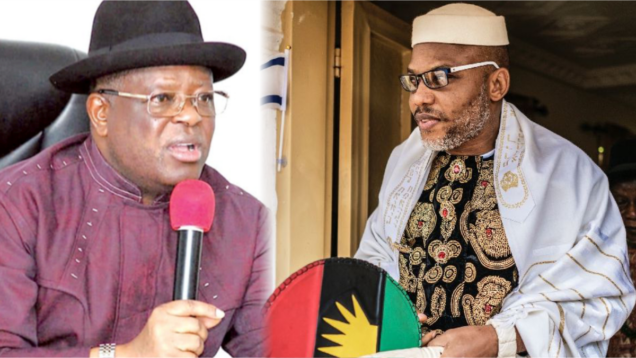 Governor Dave Umahi of Ebonyi State said the Igbo socio-cultural body, the Ohanaeze Ndigbo, is responsible for the delay in the negotiation for the release of Nnamdi Kanu.

Umahi, while speaking with Channels Television on Friday, said President Muhammadu Buhari agreed on political solutions for the release of Kanu but Ohanaeze failed to initiate negotiation.

The governor said: “We wished that it should be solved and that’s why I went to Mr. President. And our leader, Chief Mbazuluike Amaechi, has also gone to the President and he agreed for a political solution, but it should be us that should initiate it.

“And I am asking Ambassador Obiozor (Ohanaeze President), he is very slow about this because I had gone to the DG DSS. I had gone to the Attorney-General of the Federation and they were ready to receive them to discuss. I had excluded myself so that politics is not by any means adduced to it.”

“So, we should be encouraging the president of Ohanaeze to work with the IPOB leader as Mr President suggested and then let them, you know, bring something before the Federal Government and say, ‘These are what we are bringing on board.’ I think that the President is not averse to that.”

The governor added that he foresaw the growing insecurity in the South East and that that was why his government opposed the Indigenous Peoples of Biafra (IPOB) from the onset.

He, however, said many people misunderstood him and “jumped into and used it for politics”.

Umahi lamented that the situation is now “a pain in everybody’s eye” in the region.