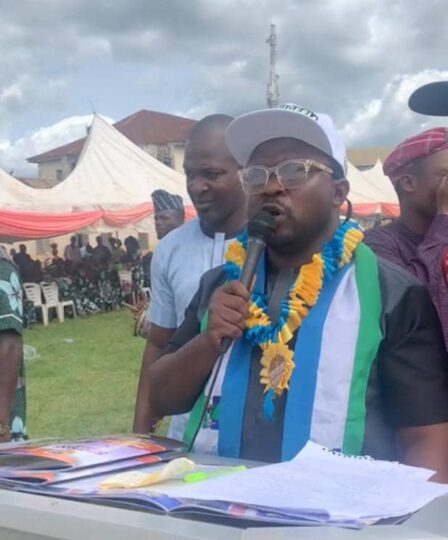 Arrowhead of the New Nigeria Mandate and presidential aspirant, Mr. Olufemi Ajadi has admonished Nigerian youths to ensure they vote wisely in the 2023 general election.

Ajadi who is aspiring on the platform of the New Nigeria People’s Party (NNPP) advised on the sidelines of the Gbongan Olufi Day, a cultural festivity of the Osun people, which he graced.

He expressed optimism about the emergence of an ethically reoriented breed, saying this new breed would bring about the much-desired transformation in the country’s polity.

He said it was not enough for youths to grumble about bad politics in the country, and yet refuse to do the needful.

He said such needful was by, first obtaining their voters’ cards and by also being willing to participate in the electoral process of their country.

The 2022 Gbongan Olufi Day had His Royal Majesty Oba Adetoyese Oyeniyi Odugbemi 1, the Olufi of Gbongan Land, as the Chief Host and Royal Father of the day, and was held on Saturday, May 7.

Ajadi who traced his matrilineal lineage to the Olupinmi family of Gbongan town, commended Oba Adetoyese for perpetual commitment to the development of Gbongan town, in fact, in making it a great town in Osun State.

He added that the chiefs and other indigenous people of the town needed to be given kudos as well for their unquantified contributions to the cultural preservation of the Yoruba race, through the holding of the Olufi Gbongan Day.

” It is a great pleasure to be in your midst today to witness this remarkable event, 2022 Olufi Gbongan Day.

“You deserve kudos for putting up this display, and in fact, in helping the preservation of the cultural heritage of the people.

“I urge you to keep up this display so that this great tradition could be sustained for generations coming”, Ajadi admonished.

Reiterating his call on the youths to keep their voters’ cards handy, he said they had a collective duty to enthroning quality leadership in the country.

The politician said if truly the future belonged to the youths, they should play major roles n the choice of who emerged and who led them.

He reiterated that all the youths in Gbogan should get their voters’ cards to choose their leaders wisely in the forthcoming general elections.

“I pray that God will give us all life to witness next year’s celebration of Olufi Day.

“I pray also that next year’s edition of the festival would be grand, amen. Thank you, the good people of Osun state” he said.