Atiku: How I will tackle insecurity if elected president 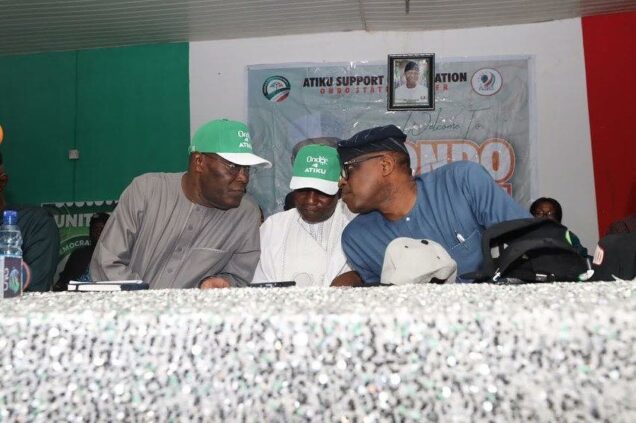 Atiku with leaders of PDP in Ondo

Former Vice President Atiku Abubakar on Sunday night in Akure, the capital of Ondo State revealed how he will tackle the insecurity problems in the country if elected as the country’s president in 2023.

Atiku, one of the presidential aspirants on the platform of main opposition Peoples Democratic Party, PDP revealed the plan while appealing for support of delegates and leaders of the party for the presidential primary scheduled to hold at the end of this month.

The former Vice President said he would begin by recruiting more men and women into the security agencies and procure more equipment for the Police.

He added that provision of more personnel and equipment to the security agencies is also one of the best ways out of the present security challenges.

“Every part of this country is dealing with one aspect of insecurity or the other, I will be very tough on law and order.

“It is only when you secure the country, there is peace, there is law and order, you can deal with economic challenges,” he said.

Atiku also said he would support devolving more powers to states and local government so that they could deal with their problems effectively.

“It is that unity that will enable us again to live as one nation, one people under God.

The former vice-president also said he would provide adequate funding for education, saying “education is key to everything”.

He appreciated the people of Ondo State for trusting him and voting for him as the candidate of PDP in the 2019 election.

Atiku urged the delegates to vote for him at the party’s primary slated for May 28.

“We can only achieve this, if you as delegates, support me and I win the nomination, and I go ahead to win the election.

“Atiku Abubakar is a household name in Ondo State, that is why you gave me over 35,000 vote margin in the last election. You deserve the best in this country,” he said.

The aspirant dismissed insinuations in some quarters that he was not strong enough to lead the country, stating that he has been travelling across the Southwestern states by road to meet delegates in the last couple of days.

Speaking, Ondo State PDP Chairman, Hon. Fatai Adams, assured Atiku that the state delegates would “compensate” him with their votes.