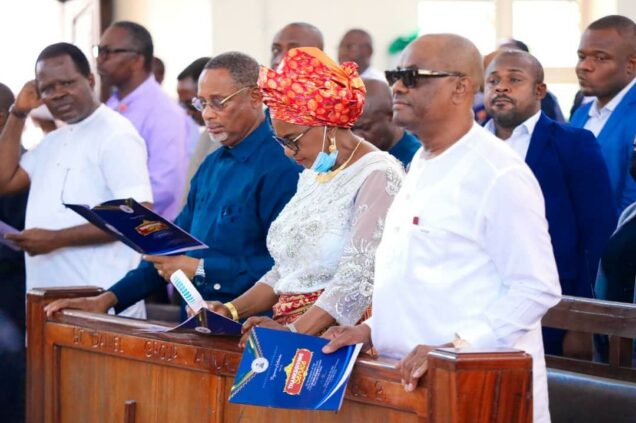 Rivers governor, Nyesom Ezenwo Wike has said All Progressives Congress (APC) governorship aspirant, Tonye Cole, has questions to answer about alleged $50 million received by his company, his Sahara Energy, from the administration of former governor Rotimi Amaechi before he can aspire to govern the State.

Wike made the declaration at a thanksgiving service on Sunday to celebrate the legal victory secured at the Supreme Court of Nigeria in the oil well dispute between Rivers and Imo States held at St. Paul’s Anglican Cathedral in Port Harcourt.

The governor insisted that he is not against anybody aspiring to be governor of the state, but in the case of Mr Cole, he must first give account for the money he received from the Amaechi’s administration.

“He (Cole) must account for the $50million they took from our account. Whoever knows him should tell him. $50million was taken from Rivers State Access Bank account and transferred to Sahara Energy account. And I asked them what is the job you people did for Rivers state? Can I see the contract paper, did you people loan us money?”

Governor Wike said it should not be a situation where the former governor will bring his business partner to become governor of the State when they have both sold and bought assets of the State including gas turbines.

“You think you can sell this state. The former governor think that he can bring his business partner, after you have sold all our gas turbines, Olympia hotel, collected our $50 million cash.”

Governor Wike described as a waste of time the 48 hours ultimatum issued by the Ijaw National Congress (INC) over the arrest of Farah Dagogo, who is standing trial on two-count charge of conspiracy to felony and cultism.

The right thing for them to do, governor Wike said, would have been to come to government to find out crux of the issues.

Governor Wike expressed the regret how criminals who raped women, kidnapped people and done several crimes were allowed to live above the law with the lifestyle that they are Lords who cannot suffer any consequences of their actions.

According to Governor Wike, Farah would have lived within the bounds of the amnesty offered him by the Federal Government instead of returning to acts that threatened the peaceful conduct of the Peoples Democratic Party (PDP) screening exercise.

Governor Wike explained that as chief security of the state, he directed the police to arrest Dagogo because he had mobilised cultists to disrupt the screening of federal and state legislature aspirants. According to the governor, some of the cultists were arrested by the police and arraigned in court.

“Enough is enough of all these young boys, thinking that they can take everybody for granted and overrun the state, not when I’m a governor of this State. You can do it when another person is a governor, not while I’m here.

Wike also berated the former director general of the Nigerian Maritime Administration and Safety Agency, NIMASA, Dr Dakuku Peterside, for allegedly threatening the peace and stability of the state over the arrest and arraignment of Dagogo in court.