Trudeau sends message to Putin: You will lose in Ukraine 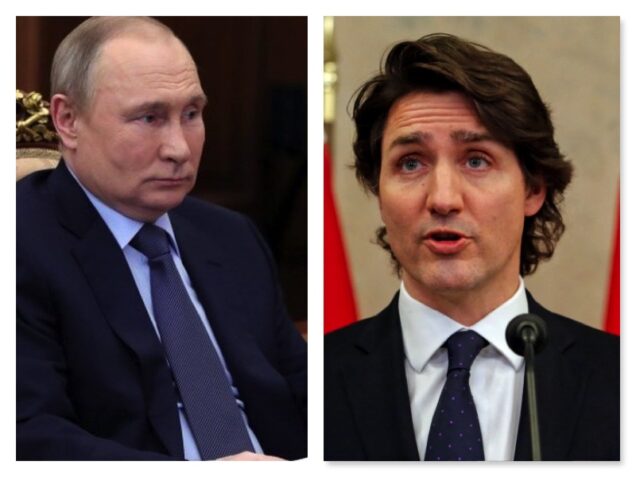 On the day that Russian President Vladimir Putin is commemorating the defeat of Nazi Germany in 1945,Canadian Prime Minister Justin Trudeau has predicted doom for him in Ukraine.

“He can only lose,” Trudeau said when asked what he would tell Putin on the eve of Russia’s commemorations of the defeat of Nazi Germany in World War Two, which Moscow calls the Great Patriotic War of 1941-45.

Trudeau told Reuters that the world will do everything possible to ensure that Russian President Vladimir Putin loses his war in Ukraine.

Trudeau added that the West will also keep Moscow under sanctions for years.

“What Putin needs to understand is that the West is absolutely determined and resolved to stand against what he is doing,” Trudeau said.

“His illegal war, his escalations, his crossing of red lines by choosing to further invade Ukraine means that we will do as a world everything we can to make sure that he loses.”

Speaking on the sidelines of an unannounced visit to Ukraine for talks with President Volodymyr Zelenskiy, whom he calls a friend, Trudeau said Putin is making a terrible mistake.

“He is inflicting atrocities upon civilians, and it’s all something that he is doing because he thought he could win. But he can only lose,” Trudeau said.

On Sunday, Europe commemorated the 77th anniversary of the surrender of the Nazis. Russia celebrates the victory on May 9. Nazi Germany’s unconditional surrender came into force at 11:01 p.m. on May 8, 1945, which was May 9 in Moscow.

Trudeau also echoed a statement from the Group of Seven issued earlier on Sunday, following a video call of G7 leaders with Zelinskiy, on how Putin’s “actions bring shame on Russia and the historic sacrifices of its people” during World War Two.

“Quite frankly, on Victory in Europe Day, when we all celebrate the victory over fascism of so many decades ago,” Trudeau said, “Vladimir Putin is bringing shame upon the memory of the millions of Russians who fought and died in the fight for freedom and the fight against fascism.”

Putin, Russia’s paramount leader since 1999 who will preside over the anniversary celebrations on Monday, in recent years has used Victory Day to needle the West from a tribute in Red Square before a parade of troops, tanks, rockets and intercontinental ballistic missiles. read more

Earlier, Trudeau said Canada will provide new weapons and equipment for Ukraine and will reopen its embassy in Kyiv, the country’s capital.