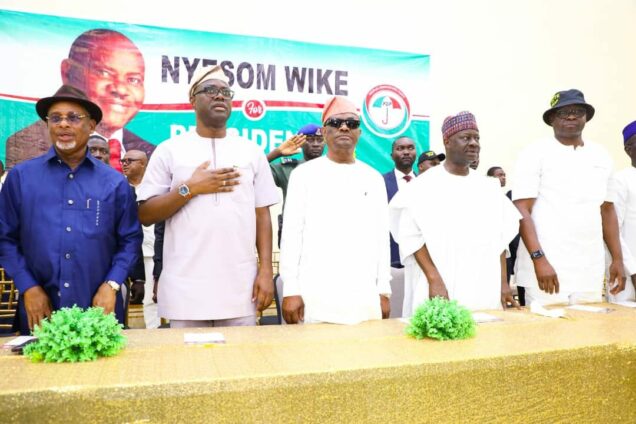 Makinde and Fayose both stood by Wike as he met with delegates of the Peoples Democratic Party (PDP) in Ekiti State to solicit votes as he seeks to become the presidential flag bearer of the party.

According to him, the killing of innocent people by bandits and insurgent groups was caused by the lack of a proper leader in Nigeria.

Wike said: “A proper Commander-in-Chief will never allow this country to go down like this. What am I doing with the service chiefs? Their business is to protect Nigeria and Nigerians.

The presidential aspirant maintained that the All Progressives Congress-led federal government has failed in its primary responsibility to protect life and property, hence, has no business being in governance.

Governor Wike emphasised that what is happening in Nigeria is affecting everybody including Moslems, Christians, Northerners and Southerners alike.

The Rivers State governor said never had Nigerians been so divided as seen under President Muhammadu Buhari led administration.

Governor Wike described his quest to rescue Nigeria and ensure the safety of life and property under a proper Commander-in-Chief, as a mission to right the wrongs and give Nigerians back their country.

“Look at the hunger. Look at the poverty. This country requires a leader now that can confront the issues of insecurity.

Governor Wike reiterated his resolve to form a government of national unity if he secures the presidential ticket of the PDP, contests the 2023 presidential election and wins resoundingly.

Speaking further, Governor Wike urged the delegates to consider him the most competent, courageous and fearless leader to vote for during the party’s primary on the 28th and 29th of May 2022.

Governor Wike enjoined the PDP family in Ekiti State to continue to work in unity and assured them of his and Oyo State governor’s support at the next gubernatorial election in that State.

On his part, Gov.Makinde said the South-West geopolitical zone will vote as a bloc during this month’s PDP national convention.

“The South-West zone, we will go in one direction. The South-West zone will determine who is going to get the ticket of PDP. So, the delegates will have the heavy load of Abuja and by the grace of God we will deliver.”

Governor Makinde said the era when the South-West was regarded as untrustworthy is over.

He stressed that they will play a central role during the presidential primary and will also get a central benefit when Governor Wike wins the 2023 presidential election.

Similarly, the former governor of Ekiti State, Ayo Fayose, noted that the southwest has suffered gross negligence under the APC administration.

“We are going to go to this convention united. Nobody in the south-west particularly in Ekiti will start going to one aspirant in the night.”

Former Gombe State Governor, Dr. Ibrahim Hassan Dankwambo, said having worked with four Nigerian presidents, he is convinced that Governor Wike is the only aspirant with the resolve to tackle insecurity and other issues besetting the Nigerian state.