Djokovic turns spotlight on Carlos Alcaraz ahead of Roland Garros 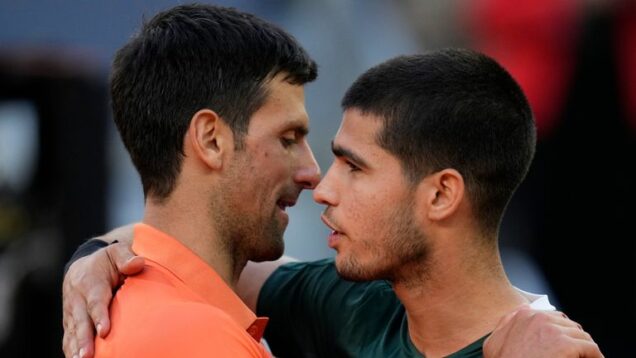 Novak Djokovic on Monday hailed Carlos Alcaraz as the “best player” of the season so far and said the Spanish teenager is one of the “main favourites” for Roland Garros.

Djokovic, who opens his Rome campaign against Russia’s Aslan Karatsev, lost to Alcaraz in the semi-finals in Madrid last weekend and paid tribute at a press conference.

After taking out Rafael Nadal and Djokovic, Alcaraz picked up his fourth title of the year on Sunday with victory over world number three Alexander Zverev in the final.

He became the youngest player since the start of the ATP Tour in 1990 to beat three top-five players at the same event.

“So far he’s the best player in the world, no question, this year with the results that he’s been doing,” Djokovic said at the Italian Open.

“The way he was dealing with the pressure in our match a few days ago, how calm he was all the way until the end, was impressive. He deserved to win the trophy.”

Alcaraz hit a career-high ranking of number six on Monday and leads the tour with 28 wins against three losses in 2022.

The 19-year-old has seven top-10 victories this season, more than any other player. He is skipping the Rome tournament so he can be in peak condition for the French Open later this month.

“Everything about his game is really impressive. He’s a really complete player, can play equally well offensively and defensively. He’s the talk of the sport,” added Djokovic of Alcaraz.

“Roland Garros, he’s definitely one of the main favourites, no doubt.”

Djokovic has missed multiple tournaments this year after choosing not to get vaccinated and arrives in Rome with just 11 matches under his belt (seven wins and four losses).

While he is still searching for his peak form, Djokovic believes his own “level of tennis is really high now”.

Meanwhile, third seed Rafael Nadal said he still has work to do to improve his game, having just returned from a six-week injury lay-off in Madrid last week.

The 35-year-old has dealt with numerous physical problems over his career, including a chronic foot injury that flared up last season, and ruled him out of Wimbledon and the US Open.

Nadal returned at the start of 2022, having played just two matches in the previous six months, and stormed to a 21st Grand Slam title at the Australian Open, He accumulated a 20-0 win-loss record before falling to Taylor Fritz in the Indian Wells final.

Nadal said it’s tougher his game this time because the injury struck mid-season rather than at the end of a campaign.

“My body is like an old machine. To put this machine on again it already takes some time,” explained Nadal, who faces John Isner or Francisco Cerundolo in his opening match in Rome.

“It’s not the same when you have 19 than when you are almost 36, with all the issues that I went through in my tennis career, no?

“I am confident that I can play well honestly. I need some time, but maybe this week can be a positive week, maybe not. Who knows?”