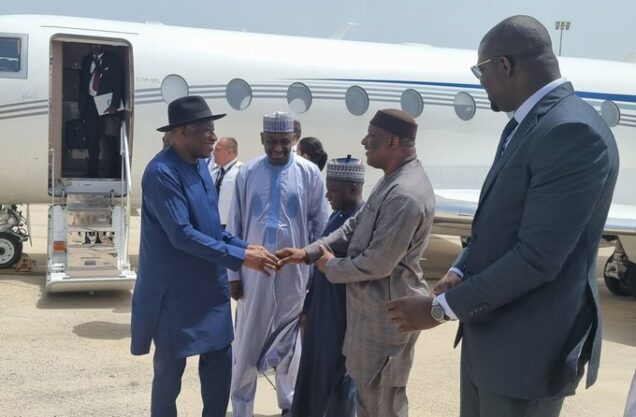 Former Vice President, Dr. Goodluck Jonathan has travelled to Dakar, Senegal a day after controversy trailed the purchase of APC’s N100 million presidential form for him.

The Miyetti Allah Cattle Rearers Association had on Monday purchased APC’s presidential forms for Jonathan into the crowded presidential race of the All Progressives Congress.

On Monday, some leaders of the association paid N100 million into the coffers of the APC to buy the Expression of Interest and Nomination forms.

As controversies over the purchase of the form raged on, Jonathan denied authorising anyone to buy presidential form for him, considering it as an insult.

Ikechukwu Eze, media adviser to Jonathan issued a statement Monday night debunking the attempt by a Fulani group to drag him into the crowded presidential race of the All Progressives Congress.

“It has come to our notice that a group has purportedly purchased Presidential Nomination and Expression of Interest forms, of the All Progressives Congress APC, in the name of former President Dr. Goodluck Ebele Jonathan.

“We wish to categorically state that Dr. Jonathan was not aware of this bid and did not authorise it. We want to state that if the former President wanted to contest an election, he would make his intentions clear to the public and will not enter through the back door.

‘While we appreciate the overwhelming request by a cross-section of Nigerians, for Dr. Jonathan to make himself available for the 2023 Presidential election, we wish to state, that he has not in anyway, committed himself to this request.

“Buying a presidential aspiration form in the name Dr. Jonathan without his consent, knowing the position he had held in this country, is considered an insult to his person. The general public is therefore advised to disregard it,” Jonathan’s aide said.

But barely a day after the incident, Jonathan has travelled to Senegal to attend a Dialogue on Sustaining Democratic Principles in the ECOWAS sub-region organised by the West African Elders’ Forum.

He tweeted: “My team and I in Dakar, Senegal, to attend a Dialogue on Sustaining Democratic Principles in the ECOWAS sub-region organised by Th eWAEF.

“We thank officials of the Senegalese Govt & staff of the Nigerian Embassy for the warm reception and looked forward to a fulfilling outing.”