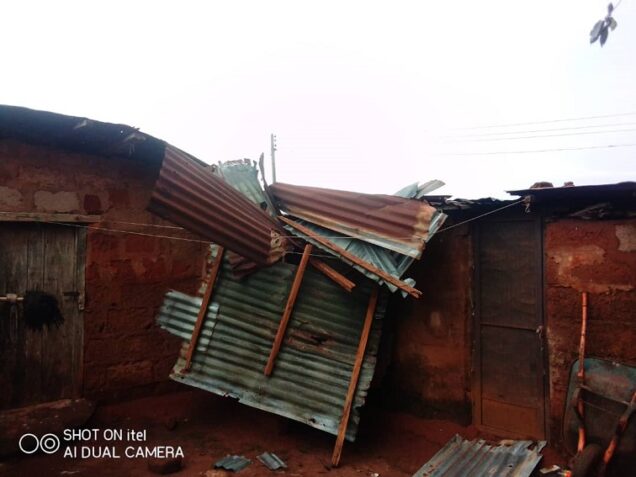 One of the buildings affected by the rainstorm that rendered hundreds of residents of Ubiaja, in Esan South-East Local Government Area of Edo State homeless last Sunday

Hundreds of residents of Ubiaja, the administrative headquarters of Esan South-East Local Government Area of Edo State, have been rendered homeless by a violent rainstorm that occurred Sunday night.

The rainstorm which lasted for several hours, blew away rooftop of several houses and destroyed valuables belonging to residents.

Properties worth several millions of naira were also destroyed by the terrible incident, which affected mostly Ebhuru quarter of the community.

Among buildings destroyed by the rainstorm were private residences and some religious centres, while valuables within were also badly damaged.

Narrating what transpired, an eyewitness who did not want to be named in print, explained that the entire community has been thrown into sadness because the rainstorm rendered them homeless.

He called on the State Emergency Management Agency and other stakeholders to assist them.

Also speaking, one of the victims whose property was affected, Victor Osehobo, a journalist and Assistant State Publicity Secretary of the All Progressives Congress (APC), in the State, said his joy was that no life was lost in the unfortunate incident.