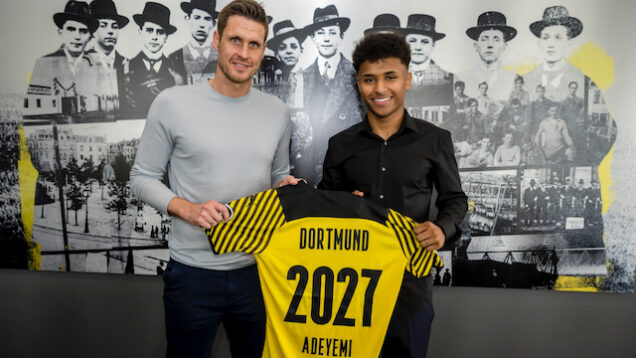 The announcement from the Bundesliga runners-up came around an hour after the news that they had reached an agreement with Manchester City to sell striker Erling Haaland to the English champions.

No details were given but the transfer fee has been estimated at between 30 and 40 million euros (between 31.6 and 42.1 million dollars).

Borussia Dortmund will receive 75 million euros for Haaland via his buyout clause.

Like Haaland two years ago, Adeyemi arrives from Salzburg where he won three Austrian league and Cup titles each during a four-year spell.

He has scored 22 goals in all competitions this season.

“Karim Adeyemi is a highly talented, young German international who through his strong finishing and incredible pace will make a valuable addition to our attacking play,” Borussia Dortmund’s sporting director Michael Zorc said.

“He is someone who has a strong affinity for BVB, who supported the Black & Yellows as a youngster and who decided to sign for Borussia Dortmund amidst several offers from Europe’s top leagues.”

Adeyemi, son of Nigerian and Romanian parents, helped Germany win the under-21 Euros last year and then got his first call-up in autumn and scored on his debut against Armenia.

“As a young boy I was fascinated by the Black & Yellows’ fast-paced football. That’s why, as soon as I heard Borussia Dortmund were interested in me, I knew I wanted to sign with BVB,” Adeyemi said.

“I made the conscious decision to sign a long-term deal because I’m convinced that we’re going to form an exciting team, that with the support of the amazing fans Borussia Dortmund will be able to compete for and win titles in the years to come.”

Adeyemi is the third big signing for Borussia Dortmund who finally want to challenge Bayern Munich again for the title.

Borussia Dortmund last lifted the trophy in 2011 and 2012 before Bayern Munich won the next 10.

The other big signings are Germany centre-backs Nico Schlotterbeck and Niklas Süle, who arrive from Freiburg and Bayern Munich respectively, to bolster Borussia Dortmund’s shaky defence.

“After the transfers of Niklas Süle and Nico Schlotterbeck, we are getting another very exciting player for next season with Karim Adeyemi,” Zorc said.(dpa/NAN)