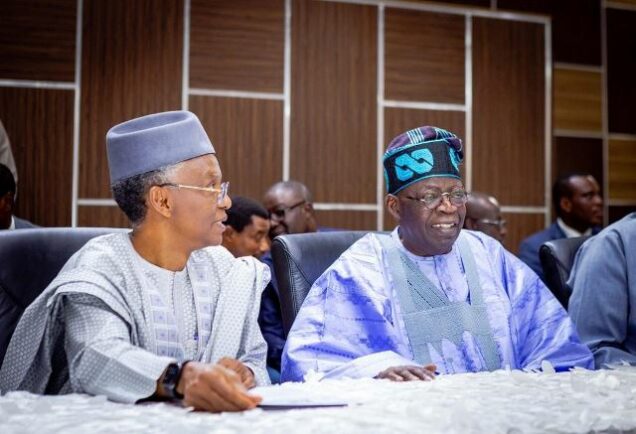 The 69 delegates of the Kaduna branch of the All Progressives Congress (APC) have endorsed presidential aspirant Asiwaju Bola Tinubu over his aspiration to contest for the presidential seat in 2023.

The delegates gave their support after Gov. Nasiru El-Rufai, said he would only rally round any candidate supported by the delegates.

El-rufai also thanked Tinubu for the visit and also for remembering Kaduna during its trying moments and for his generosity.

According to him, “you are the first presidential aspirant to come to Kaduna, you are not taking us for granted, we will not forget that.

“We keep to our words and ensure that as we intend to keep our promise. We will also want you to promise to deal with insecurity, infrastructure and support agriculture and empowerment,” he said.

Earlier in his remarks, Tinubu assured Nigerians that his leadership would bring peace, stability and end banditry and killings if elected.

The APC National Leaders said he remains the most most capable candidate for the job.

According to him, “governance is not about your physical strength, it is not about wrestling, it is about thinking, We are going to use the brain to bring development and innovations to Nigeria.

“I am the best of all them all. In terms of experience, private sector, governance, we joined hands together to form APC, We have never failed, and we will not fail, our broom will sweep them away. I know the road follow the man who knows the road,” he said.

According to him, the federal government under him needs electricity for proper industrialization.

“The textile industry will be back, farmers will be safe and food security will be enhanced,” he said.

On his part, former Governor of Borno state, Senator Kashim Shattima, described Tinubu as a mentor to many who have the ability to support the best.