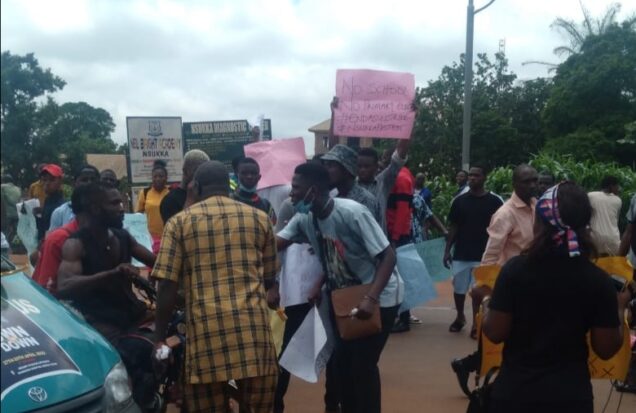 No fewer than 3,000 students of public universities in Nsukka on Thursday blocked major highways in the area in protest against the lingering strike by the Academic Staff Union of Universities (ASUU).

The protest organised by the National Association of Nigeria Students (NANS) stalled vehicular movements in Nsukka town and environs for hours.

The protest which started from the first gate of the University of Nigeria Nsukka (UNN), stretched to Opi junction linking Enugu-9th Mile and Enugu-Benue roads.

The protesters were carrying placards with inscriptions like “No suspension of ASUU strike, No party primaries”, “We are tired of staying at home”, “FG should settle with ASUU”, “We want to go back to school”.

Other placards include “Politicians have N100m to buy election form but no money to meet ASUU demands” among others.

Speaking with newsmen, the leader of the protesters, Emmanuel Obi, Chairman, Joint Campus Committee (JCC), Enugu State said students embarked on the protest nationwide to express their anger and unhappiness over the prolonged ASUU strike.

“Students all over the country are not happy staying at home in the past two months because of Federal Government’s inability to resolve its face-off with ASUU.

“Last Monday, ASUU extended the strike by three months and if nothing is done, students will be at home for another three months.

“Government should meet ASUU demands now so that the union will suspend the strike and students will go back to school,” he said.

He said that NANS would sustain the protests across the country until ASUU suspended the strike.

“The NANS national leadership has directed students in the country to block airports, major highways, Federal and state secretariats, minsters offices and roads leading to Aso Rock by next week.

“If the strike is not suspended, there will be no political party primaries in the country especially that of PDP and APC; if they like they should roll out Armoured Tanks to kill us, we are ready to die,” he said.

A motorist, who identified himself as Mr Sunday Ogbonna, said he had been in traffic for about an hour because of the protest by NANS.

“Government should do something to end ASUU strike so that the students will go back to school,” he said.

A passenger, Mrs Esther Ani, said she supported the protest by students adding that she was not happy because her children in public universities have been at home for the past two months.

“Government should do something serious to end incessant strikes in public universities in this country,” she said.