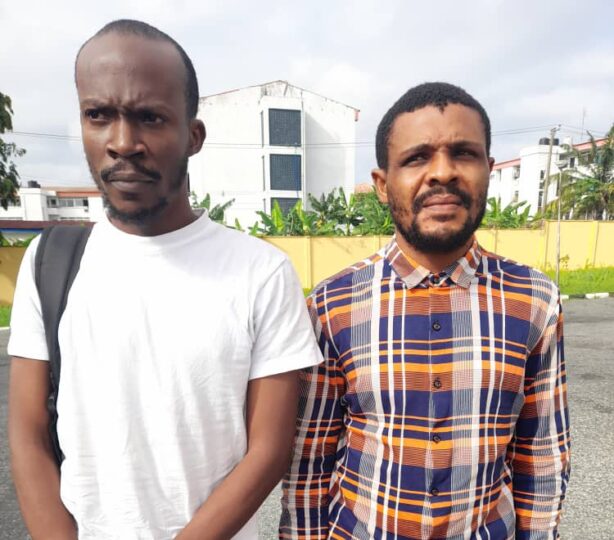 Atsuwe Emmanuel Terver and Onguntubor Victor Roland have pleaded guilty to one count of separate charges bordering on impersonation.

They both pleaded guilty as they were arraigned before Justice Ijeoma Ojukwu of the Federal High Court sitting in Calabar, Cross River State on Wednesday.

One of the charge reads: “That you, Atsuwe Emmanuel Terver (a.k.a Benjones, Rony, Dieter Kranz, Andrew Mercer, Ben Arezki, Jerry Hierro), “M” sometime in 2022 within the jurisdiction of this Honourable Court did fraudulently impersonate one Ben Jones to unsuspecting victims, with intent to gain advantage for yourself and thereby committed an offence contrary to Section 22 (2) (b) (i) of the Cybercrimes (Prohibition, Prevention) Act 2015 and punishable under Section 22 (2) (b) (iv) of the same Act”.

They pleaded “guilty” to the charges when it was read to them.

In view of their pleas, EFCC Counsel, S. R. Akinrinlade, prayed the court to convict and sentence them accordingly. However, defense counsel Koko Essien and Udeme Tom prayed to the court for leniency.

Justice Ojukwu, however, convicted and sentenced Terver and Roland to six months imprisonment each, with an option of a fine of N600,000.00 (Six Hundred Thousand Naira only).

The court also ordered that they forfeit all instruments used in committing the crime, while Roland was ordered to restitute the sum of $350 to his victim, through the EFCC.

The convicts’ journey to jail started when the EFCC received an intelligence report on their online criminal activities.

They specialized in impersonating foreign nationals and defrauding their victims under that guise.