Saraki: Why I want to be president 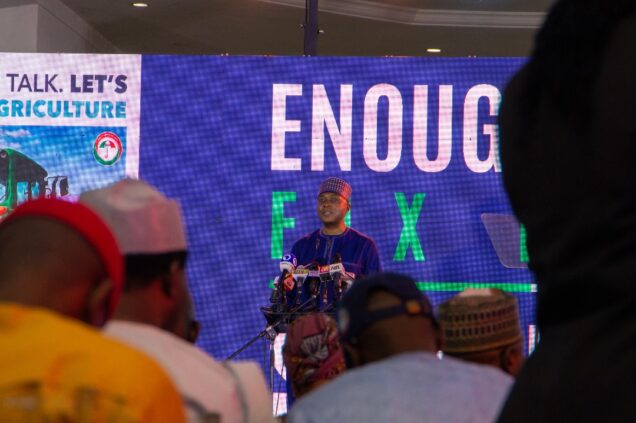 Saraki speaking when he formerly declared for 2023 presidency on Thursday

Former President of the Senate, Bukola Saraki says his desire of becoming Nigerian President is to rediscover the country and make it great for the children and generation yet unborn.

Saraki said this when he interacted with journalists in Abuja on Thursday.

According to him, joining the government as Special Assistant to former President Olusegun Obasanjo in 1999 made him realise the limitless possibilities for service through government.

He said that also made him realise how political power in the hands of a committed, competent and courageous leader could solve real problems and uplift the destiny of a nation and its people.

Saraki said that motivated him to contest and win the election as the Governor of Kwara in 2003, leaving the state better than he met it after eight years of service.

Saraki said that as a senator, he was able to rise above ruinous partisanship and challenged the massive scam perpetrated under the cover of fuel subsidy.

“As Senate President, I defended the integrity of the National Assembly, sometimes, at great personal cost,” he said.

He said that in all the positions he occupied, he was driven by the deep conviction to serve, help, proffer solutions and leave behind a legacy of courage, hard work and unyielding commitment to making a difference.

“Perhaps, more importantly, I have gone into each of these positions with clearly thought-out plans, decided well in advance, ” he said.

Saraki said that if elected he would assume the office of the president with well-thought-out plans, and implement them with courage and conviction.

He said that while he acknowledged the great efforts of all former Nigeria leaders over the years and thank them for their service to the nation, he believed more still needed to be done

He said that if elected he would ensure that the law on compulsory basic education was enforced and quality of teaching improved in all public schools.

He also promised to push for compulsory health cover from the current seven per cent to 50 per cent in the first two years, while also addressing insecurity.

“I will do everything to protect the lives and properties of every Nigerian and everyone that live within our borders.

“ I will ensure that all our men and women in uniform are well-trained, are well-paid and are well-equipped,” he said.

Saraki also pledged to diversify the economy to raise the revenue from the non-oil sectors to the same level as the country currently earned from oil.

“As long as there are still people in this country who believe that they can break the laws of Nigeria with impunity; who think that crime has no consequences, then the job is not done.

“And this is why I want to be President because I will ensure strict compliance with the rule of law and guarantee consequences for crime.

“As long as we still import tilers, plumbers and electricians from neighbouring countries, then the job is not done.

“And this is why I want to be President because I will collaborate with the industries, and train one million of our youths in technical and vocational skills each year,” he said.

He said that 65 million Nigerians still live in slums in cities and urban centres, promising to deliver half a million affordable housing units every year to low-income earners and eliminate urban slums.

The former senate president also promised to invest massively in skills, cloud computing, data analytics, programming and other such in-demand skills to drive innovation and competitiveness among youths.

Saraki also promises to create the Nigeria Creative Industry Initiatives to protect leadership positions on the African continent and position Nigeria to be a global leader in the cultural production economy.

“As long as our university lecturers still have reasons to embark on strike; as long our universities still rank outside the top 1000 in the world, then our job is not done.

“And this is why I want to be President, because I will ensure that our universities and higher education institutions are competitive and well-funded, adopting models and approaches that have served the most successful higher education systems in the world.

“ As long as some of our best and brightest brains still relocate to other countries to find fulfilment, then our job is not done.

“And this is why I want to be President because I will develop targeted incentives to reverse the brain drain and keep our professionals in the country,” he said.

Saraki said that his experience at the executive level and the highest legislative institution in the country made him a unique asset in democratic leadership at a time that called for consensus building, cooperation and compromise.

“And I will bring the experience to bear in getting the most critical constituencies behind the tough decisions that we must take if Nigeria must survive,” he said.