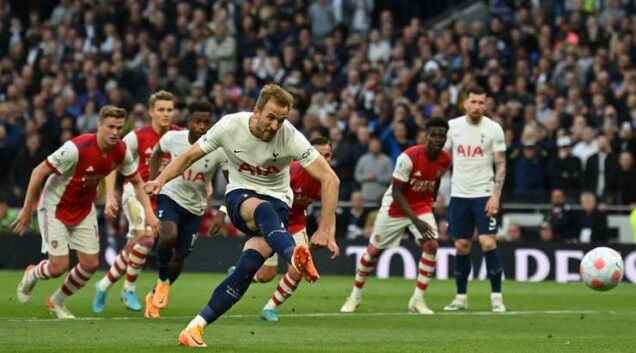 Tottenham Hotspur have revived their hope of playing champions league football next season as they thrash Arsenal 3-0 on Thursday.

Two goals from Harry Kane and one from Heung-Min Son completed Arsenal’s defeat in a London derby.

Tottenham are now fifth on the table, a point below Arsenal with two games left to play.

The homers opened the scoring from the penalty spot through Kane on 22 minutes.

Kane won the battle of wills and sent an unstoppable penalty past Aaron Ramsdale into the bottom right corner.

The Tottenham strike got his brace on 37 minutes after Rodrigo Bentancur got up really well from the corner and headed the ball into the six-yard box where Kane glanced a header into the net to make it 2-0.

Heung-Min Son completed Arsenal’s debacle on 47 minutes, firing the rebound inside the right post after the ball broke to him in the box.

Arsenal ended the game with 10 men after Rob Holding was sent off for a second yellow card in the first half.