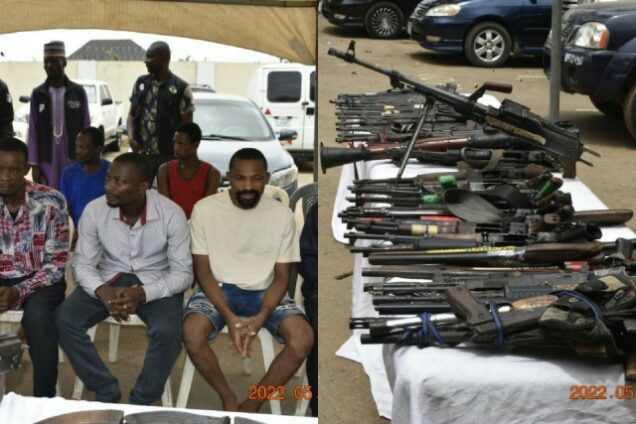 Some of the suspects and the guns recovered from them

Operatives of the Force Intelligence Bureau Intelligence Response Team (FIB-IRT) have arrested 21 deadly robbers, kidnappers and others in major operations across the nation.

He said those arrested included suspects of violent crime such as culpable homicide, armed robbery, kidnapping, arms trafficking, possession of prohibited firearms, rape, among others.

He added that the gallant operatives of the FIB-IRT, acting on a tip off that a DAF Truck carrying 45,000 litres of premium motor spirit (PMS), had been hijacked at Saminaka Village, Niger State at gun point and the occupants abducted, equally mobilized and intercepted the hoodlums at Lambata Area of Niger State, where the truck was recovered and four suspects were arrested.

“The operatives, with the aid of the Petroleum Tanker Drivers’ Association Suleja Depot, were able to recover the PMS which had been discharged by the suspects,” he said.

He assured of the Force’s commitment to dutifully following up on established cases, conclusively investigating such with a bid to bring all persons found wanting to justice.

“All the suspects will be arraigned in court on completion of investigations,” he said.