Jonathan to African leaders: How to stop coups 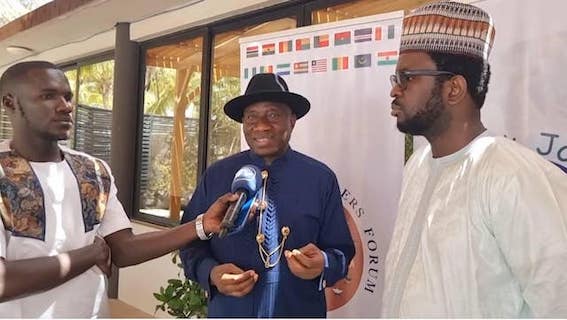 The policies, he said must be anchored on the rule of law, rebuilding public trust and strengthening governance institutions.

Jonathan gave the advice at a two-day sub-regional dialogue on sustaining democratic principles in West Africa.

The dialogue held in Dakar, Senegal.

Jonathan also encouraged African leaders to promote transparency, accountability and inclusion in their state policies to be able to deliver the dividends of democracy to the people.

The former President, who is the chairperson of the West African Elders Forum (WAEF), organisers of the event, also noted that the deficit of trust and gap between expectation and reality was another reason for the democratic reversals in the region.

“You are aware of the state of affairs in our region; the issues of coups and counter coups and the growing obsession of some state actors to ascend to power through unconstitutional means.

“We have also witnessed how civilians and other stakeholders in the civic space have encouraged and openly demonstrated solidarity with those who overthrow constitutional government.

“We are not oblivious of the fact that there are challenges that have given rise to this new wave of democratic reversals in our region.

“The non-adherence to democratic principles; disregard for the constitution, lack of respect to constitutional term limits and flawed elections have led to insecurity and the eventual collapse of constitutional governments,” Jonathan said.

He urged leaders and citizens not to keep quiet when they see the erosion of those principles that define their humanity and issues that promote solidarity.

“We must defend the cultures that uphold our unity,” Jonathan said.

He added that democracy, in spite of its challenges, is today seen as a governance culture that promotes freedom, justice and inclusivity.

“This is why we need to work together to ensure that democracy is preserved.

“Let me emphasize that our quest for peace and economic prosperity as a continent is tied to our determination to uphold the inherent principles of democracy.

“It is in this regard, that I will appeal to our leaders to continue to make sacrifices for the peace and prosperity of our continent.

“Let us increase our investments in our democracy through the strengthening of our institutions and ensure that there is separation of power and independence of the different arms and tiers of government.

“Let us guarantee the independence of our electoral management bodies in our countries, so that they can carry out their mandate with integrity, transparency, and diligence, and deliver electoral outcomes that will be adjudged credible, peaceful and free and fair.

“Let us be deliberate about issues of transparency, accountability and inclusion in our state policies. Let us respect our social contract with our people and work with solidarity with all segments of our society for the greater good of our people and continent.”

Jonathan urged political leaders to seek to overcome the temptation of the power of their offices and conform to the doctrines of the rule of law and other democratic principles.

“May we be guided by the reality that as political leaders, we are all servants to the people, we wield power and authority in trust of the people.

“At all times we must justify and not breach this trust.”

Since inauguration last year, WAEF, an initiative of the Goodluck Jonathan Foundation, with support from OSIWA, has continued to champion causes that promote peace, democracy and good governance in the sub-region.

Also in attendance were former President of the ECOWAS Commission Dr Thomas Ouedraogo and speaker of the ECOWAS Parliamenr, Sidie Mohamed.