Tinubu: I am the only one running for the president of Nigeria 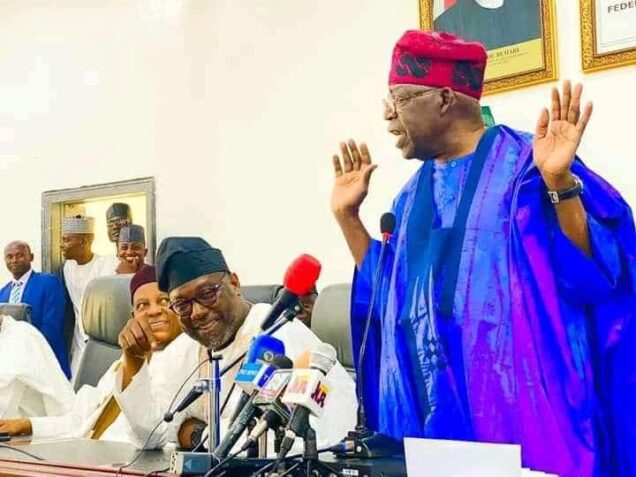 The National Leader of the APC and presidential aspirant on the platform of the party, Bola Ahmed Tinubu, said he is the only one running for the presidential race in the forthcoming 2023 presidential election.

He disclosed this on Friday while addressing delegates of APC at the Niger State Government House, Minna ahead of the forthcoming primary election.

Ahmed explained that his developmental stride and achievements as a former governor of Lagos State were track records that only he could save the country from the present situation.

“I am a better candidate because of my track records, I have produced many people, starting from councilors, house of assembly members, Senate, Reps. and governors, yet they are pointing accusing fingers at me.

“We will join hands to rebuild Nigeria of our dream, don’t bother about them; I am the only one in the race, follow me I will not mislead you, only me have the knowledge and the brain to think for Nigeria.

“I have the confidence, I have done it in Lagos and I will do better for Nigeria,” he said.

He promised to transform the country from poverty, develop infrastructure and ensure that children were in school as education was the foundation and weapon to fight poverty.

On insecurity, the presidential aspirant promised to eliminate bandits and other criminals disturbing the peace of the nation, adding that it was disheartening all roads had become danger zones for the citizens.

“It takes a brain thinker to provide security and a doer will look at economy prosperity and turn it around, We must leave our children and grandchildren with a good educational structure, not to roam on the street.

“I have what it takes which is smartness, I am better than all of them because they lack the brain that I used to rebuild Lagos,” he added.

Earlier in his address, Alhaji Kashim Shettima, former Gov. of Borno, said that Tinubu was synonymous with the revolution of democracy, adding that his track records made the present administration to get the support of the southwest in 2015.

He urged the party to give him internal support and gratitude to become president in order to replicate his track records in Lagos in the entire country.

Gov. Abubakar Sani-Bello threw a question to the delegates, whether they were in support of Tinubu and the response was overwhelming.