Atiku: How PDP will avoid 'zoning trouble' in future 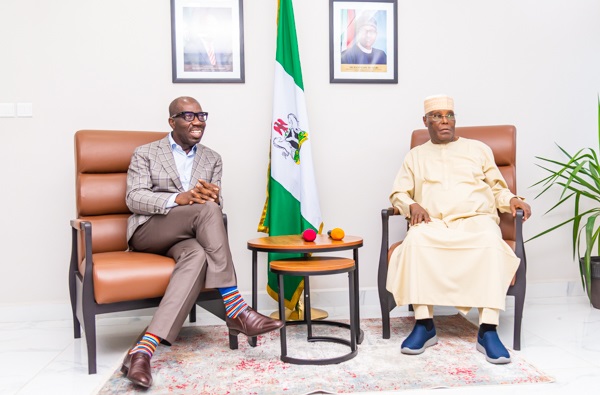 Governor Obaseki and Atiku in Benin, Edo State before his meeting with PDP delegates

Former Vice President Atiku Abubakar has said the Peoples Democratic Party, PDP will avoid the kind of controversies generated over the zoning of its 2023 presidential ticket by taking decision on it far before the primaries.

Atiku, one of the 15 presidential aspirants on the platform of PDP said while addressing delegates to the party’s convention in Benin, Edo State on Friday.

The zoning of the PDP presidential ticket had generated controversies with demands by members of the party in the South that they should produce the flag bearer of the party for the 2023 election.

The agitators for zoning had asked aspirants from the North like Atiku to drop out of the contest for the PDP ticket in support of their Southern counterparts.

However, the party, last Wednesday decided not to zone the presidential ticket, thus giving fillip to Atiku and other Northern aspirants to continue wit their aspiration.

Speaking on the controversies, Atiku said the problem was because the PDP refused to take decision on zoning in time.

“We said in future, zoning decisions should be taken in six months before the commencement of primaries so it will be settled before anything else. The PDP is the originator of zoning and power rotation. Now that it is open, all aspirants have equal opportunities.”

Atiku also said he All Progressives Congress (APC), is not an option for the 2023 presidential election while accusing the President Muhammadu Buhari’s government of misappropriating funds dedicated for education.

The presidential hopeful who noted that the current problem challenging country has multiplied under APC’s watch, promised to restore and proffer solutions to other problems bedeviling the country.

According to him: “I want to assure you that PDP will lift Nigeria from bottom to top. There are institutions established by our PDP Administration.

“We imposed Education Trust Fund so that we can distribute money to the state and local government, but this government has plundered the money to the extent our universities have been on strike for many months without lecturers earning salaries.

“PDP has done an excellent job in Nigeria. I was involved in this achievements of PDP because I was the chairman of the economic council of our administration. I used the best economists; I didn’t look at their ethnicity or religion. I was only after their talents to better Nigerians.

“Today, if you are not from a certain part of the country or religious faith, nobody looks at your face. This is criminal. I have what it takes to unify this country and I humbly submit to do it,” he said.

Earlier while addressing the State Governor, Mr. Godwin Obaseki, Atiku promised that he will prioritize investment in education, adding that education would be key to his government if elected president.

“We also passed the law to make education compulsory for every Nigerian child from primary to secondary school.”

He noted that the misappropriation fund has affected the level of education and the number of out-of-school children in Nigeria is rising by the day.

Atiku said he will sit with the party to agree on a running mate for the 2023 presidential election.