2023: APC fixes date for screening of Tinubu, Osinbajo, 26 others 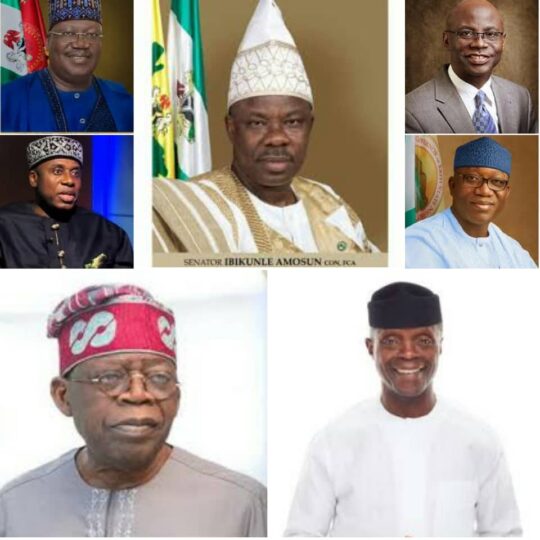 The All Progressives Congress (APC) has fixed May 23 for the screening of Vice President Yemi Osinbajo, former governor Asiwaju Bola Tinubu and 26 other aspirants who had indicated interest in the presidential ticket of the party in the 2023 general election.

This was disclosed by Alhaji Suleiman Arugugun, National Organising Secretary on Saturday.

He also confirmed that 28 presidential aspirants submitted their nomination and expression of interest forms at the close of the process last Friday.

Arugugun who spoke to journalists shortly after the inauguration of chairmen and secretaries of the party’s screening committees for House of Representatives, Senate and governorship aspirants added that some aspirants have started withdrawing from the race for the APC presidential ticket.

The News Agency of Nigeria (NAN) reports that APC special convention for the presidential primaries would hold from May 30 to June 1.

Also on the list of presidential aspirants that returned their forms are the only female aspirant, Mrs Uju Kennedy-Ohnenye, Pastor Nicholas Nwagbo, former Speaker of House Representative Dimeji Bankole, and President of the Senate, Dr Ahmed Lawal.

The party had meanwhile began the screening of the House of Representatives and governorship aspirants at designated hotels in Abuja.

“And by God’s grace on May 23, those that are left for the screening proper, will be screened,” Arugugun said.

He said that a total of 1,197 House of Representatives aspirants would also be screened by 10 panels.

“We have a very strong party, we have a big party, and we are committed to deliver the right candidates for the forthcoming 2023 general elections.

“We have no doubt that the distinguished ladies and gentleman assembled here will do just that.

“I wouldn’t want to go into details because we all know ourselves, and we have tried to engage you in a manner that you will also bring your experience to the fore,” he said.

While acknowledging that there was a long huddle ahead of the committees, Kyari appealed to the members to be patient and to ensure proper screening of aspirants to ensure that the best candidates emerged at the end.

He added that the party had been very fortunate because it had produced the best aspirants ahead of 2023 general elections.

“And also almost two thirds of the House of Representatives,” he said.

He welcomed members of the committees, saying that they had freehand to do what was required of them and would always be supported by the party’s National Working Committee (NWC) when necessary.

NAN further reports that the APC had fixed its governorship primaries for May 20, House of Assembly, May 22, House of Representatives May 24, and Senate May 25.