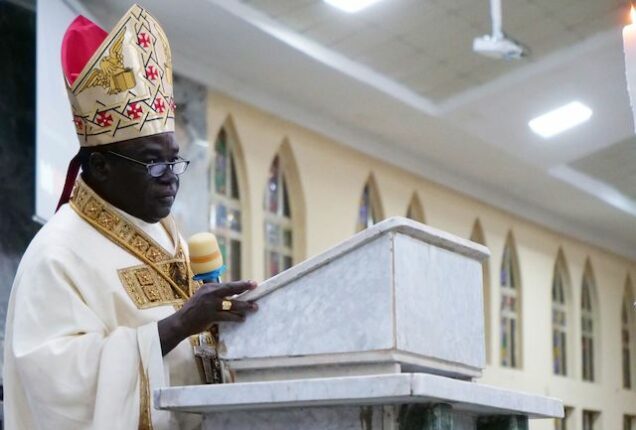 Bishop Matthew Hassan Kukah of the Sokoto Catholic Diocese, has spoken on the attack on churches by Islamic zealots protesting the arrest of suspected killers of Deborah Samuel.

Samuel a student of Shehu Shagari College of Education, was gruesomely killed for alleged blasphemy against Prophet Muhammaed.

Two suspects were arrested for the killing, but this triggered a violent protest by supporters of the killers.

During the protest on Saturday, groups of youths led by some adults in the background, attacked the Holy Family Catholic Cathedral, destroying Church glass windows.

“They were promptly dispersed by a team of Mobile Policemen before they could do further damage,” the statement added.

“The hoodlums also attacked the Bakhita Centre located along Aliyu Jodi road and burnt down a bus within the premises.”

He said his home was not attacked and he is safe.

He commended the security forces for promptly rising to the occasion to prevent further damage at our facilities, adding that no life was lost.

He however said all Masses in Sokoto metropolis have been suspended until the curfew imposed by the State Government is lifted.

The Bishop appealed to Christians to remain law abiding and pray for the return of normalcy.