APC primary: El-Rufai and his unholy game with presidential aspirants 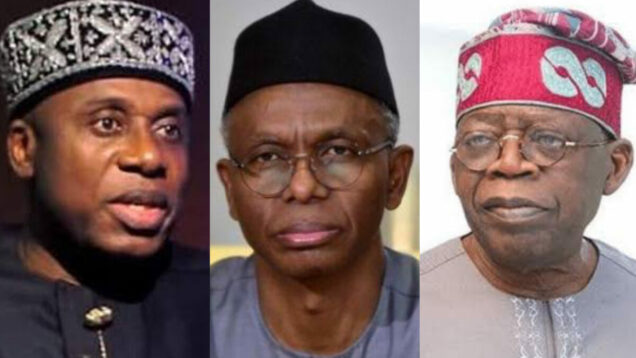 Kaduna State Governor, Nasir El-Rufai has shown that he cannot be trusted with his words. He is like a political prostitute playing games with APC Presidential aspirants. He is certainly enjoying the game with the party’s delegates from Kaduna State. No one knows where his loyalty lies right now.

In that visit four days ago, El-Rufai openly endorsed the aspiration of Tinubu to become president. The Kaduna delegates gave their support after El-Rufai, said he would only rally round any candidate supported by the delegates.

According to him, “you are the first presidential aspirant to come to Kaduna, you are not taking us for granted, we will not forget that.

“We keep to our words and ensure that as we intend to keep our promise. We will also want you to promise to deal with insecurity, infrastructure and support agriculture and empowerment.”

Few days after that visit, another presidential aspirant, Rotimi Amaechi came calling and El-Rufai, like a prostitute switched allegiance from Tinubu to Amaechi.

El-Rufai and Kaduna delegates dumped Tinubu and pledged to give their votes to Amaechi at the primaries of the party scheduled for end of the month.

The delegates, in the presence of El-Rufai said their earlier pledge to Tinubu was a spur of the moment decision which no longer stands.

El-Rufai said, “I told you when you made that pledge to Asiwaju that others may not come, because of what you have done. You made that choice without listening to anyone else. Today you have seen the difference. You’ve heard Amaechi, you’ve seen what he has done. And he has brought a very strong security team. So you know what will happen with our security if he is in charge.

“What are you going to do? Who are you supporting now? You have a huge burden on you, and you must choose what is best for Kaduna and for Nigeria.”

El-Rufai then asked the delegates who is their choice for President, to which the delegates unanimously chorused “Amaechi” and “Dan Amanar”, the traditional Daura title of Amaechi.

Certainly, El-Rufai’s game will not end here. Wait until Senate President, Ahmad Lawan and others will pay a visit. He and his delegates will keep the dumping game flying until the day of the primary election.

Critic, Reno Omokri said: “Anybody that trusts @elrufai is not wise. In less than 72 hours he publicly switched camp from Osinbajo to Tinubu. Then from Tinubu to Amaechi. He is the definition of political prostitute. Obasanjo said it in his book. He’s unable to be loyal to anyone but himself.”

If Amaechi thinks he has won the heart of El-Rufai and Kaduna APC delegates, he better not rejoice yet because his heart will soon be broken and that will not be long.