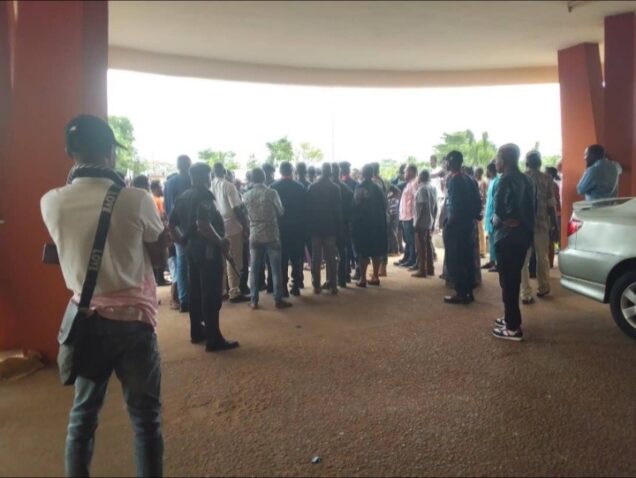 UNIBEN Students at entrance to Federal Secretariat Benin on Monday

Students of the University of Benin (UNIBEN) on Monday took over the entrance of the Federal Secretariat in Benin, the state capital, in protest over the ongoing strike by members of the Academic Staff Union of Universities (ASUU).

The protracted industrial action has put all universities in the country under lock and keys for several months.

The protesting students who blocked the main entrance of the secretariat complex as early as 7 am, prevented workers of the various federal ministries from gaining access to their offices.

They called on the Federal Government and ASUU to resolve their differences, to pave way for the resumption of academic activities on the university campuses across the country.

The protest resulted in heavy traffic gridlock around the Federal Secretariat, Aduwawa and Ramat Park axis of Benin City.

Commercial activities around the area were paralyzed, with commuters along along the busy Benin-Auchi Road stranded.

The is the second time the students are demonstrating in the State against the ASUU strike.

During the first one, they blocked the busy Benin-Lagos highway, which prevented motorist from passing.