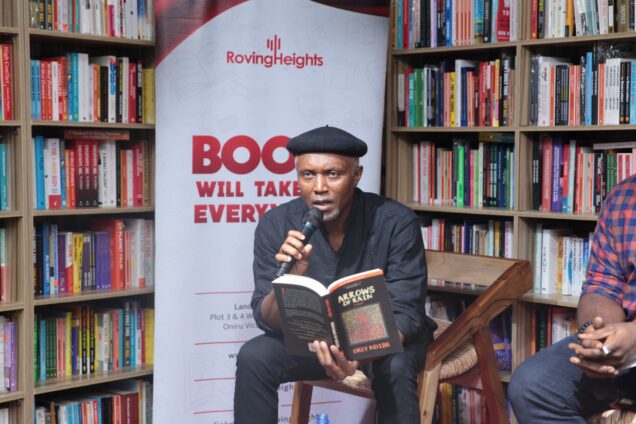 Okey Ndibe reading an excerpt from Arrows of Rain

US-based Nigerian writer, academic and journalist Prof Okey Ndibe has said former Vice President and presidential aspirant Atiku Abubakar lost an opportunity to make a human statement when he retracted his earlier condemnation of the murder of Deborah Samuel, a 200 level student of Shehu Shagari College of Education, Sokoto.

Deborah was lynched and burnt by Muslim fanatics who had accused her of blasphemy on Thursday 12 May, 2022.

Ndibe said this while presenting his critically-acclaimed novel, Arrows of Rain at Rovingheights Bookstore in Victoria Island, Lagos on Saturday 14 May, 2022.

The political novel, first published by Heinemann African Writers Series 22 years ago, has been republished in Nigerian by BookCraft. The event, a full house, was tagged: Okey Ndibe in Conversation with Toni Kan and lived up to its billings.

The distinguished scholar in response to Toni Kan’s question, referred to the unabashed and brash manner in which Atiku retracted the statement he had earlier posted on various social media platforms, out rightly condemning Deborah’s murder due to the backlash he got from supporters of that heinous crime that ill-fated Thursday.

Recall that in his first statement, Akiku had said without mimcing words: “There cannot be a justification for such gruesome murder. Deborah Yakubu was murdered, and all those behind her death must be brought to justice. My condolences to her family and friends.”

Only for Atiku to retract he statement following reactions from Northern youths who, baying for his blood, blatantly told him that he had lost their support and votes in the forthcoming presidential election. He then reissued another statement saying that that first statement was a misnomer and did “not agree with his orders.”

“This evening I received information that a post was made that doesn’t agree with my orders. I use this to announce that any post without AA is not from me. May God protect – AA, ” Atiku maintained.

Ndibe, while reacting to that capitulation, said it was time Nigerians began to draw the line and insist on what to accept and what not to.

“He (Atiku) lampooned what would have been a human statement. He said to became the President of Nigeria is so important than to sacrifice every idea. In other words, Atiku would not mind governing a nation of graves,” Ndibe said.

The acclaimed writer also averred that he kept telling people that Nigeria is an open wound. Rather than heal, those who run this country as it were, open the wound more and more.

“It is time that we began to look inwards and say to ourselves what isn’t that we are willing to accept, what impunity. Where do we draw the line and say here and no further.

“So I say to all of us we must decide -individually and hopefully through groups of like minded kindred spirits – where we draw the line. If a politician cannot say that this act is unacceptable and that the perpetrators of it must be held to account we must decide whether we want to give this man a second of consideration as a potential president.”

Sam Omatseye, writer and Chairman, Editorial Board The Nation Newspapers, for his part, wondered why Deborah’s statement is considered blasphemous. He challenged the tendency to use language as tools of power and action.

“I am really disturbed by the fact that the word blasphemy has been used. And I think that it is distorting the narrative. Who determines who blasphemes? Who is blasphemed? What does blasphemy mean?

“We have tended to look at the girl who blasphemed rather than somebody who just expressed herself. That is what Michel Foucault the French theorist described as the rhetoric of power. The way you shape the language of a discourse is usually a carrier of power. So what has happened is that we have actually given power to those who killed her by insisting that she had a right to blaspheme, when what she had a right to do was to express herself. And we need to be always careful the way we use language because in the final analysis it is what shapes the direction of our action,” Omatseye said.

Kunle Ajibade, writer, journalist and Executive Editor TheNEWS/PMNEWS condemned Deborah’s murder, saying that those who carried out that dastardly act are not practising true Islam but rather are manipulating religion to suit their nefarious purposes. He based his argument on how Prophet Mohammed Himself forgave a man who had urinated in a mosque. Rather than punished the man He asked a sane man to clean up the mess the man they believe was insane had done.

“What Islam are those bigots protecting? Is it really Islam or just their guarantied territory of power? Just manipulating religion, to go back to what Sam was talking about. In the wake of that murder, some religious groups, Muslim Islamic groups, have actually said a few things that we should pay attention to. NASFAT, which is a collection of enlightened professional Muslims, issued a statement where their missioner said and quoted some sayings of Mohammed and the Koran.”

Ajibade said a distinction should be made between those who manipulate religion and those who do not. “So I am saying let us make that distinction between people who are manipulating religion, whether Islam or Christianity and call them out when we see them. They are not protecting, they are not speaking for any religion. They are just speaking for power, trying to claim power. That’s important,” he noted.

Omatseye, aligning with Ajibade’s statement, said the problem is that the manipulative power of the religious fanatics lies in the large following they command. And that he believed was the reason Atiku had to bow to pressure.

“The point again is where does the manipulating power reside? And how much mass of people are they appealing to? The point with Atiku was that he discovered that the mass are with these blood-thirsty gods. And that is where the problem is.

“And that is why I said that we have to first of all go into the meaning of the language. The silence that has now pervaded the acceptance cold blooded murder in the name of religion. These people are not going to sit down and contemplate the difference between what Mohammed said and what he didn’t say. So what Ajibade said is very good for a contemplative society. We are in an emotive society therefore fanaticism takes pride of place. And that is why this is a very dangerous time.”

Ogaga Ifowodo, poet, lawyer, writer and activist, also wondered why religious fanatics must fight for God who is considered omnipotent, omniscient and omnipresent. . According to Ifowodo their actions show that they are fighting for God who is too weak to fight for Himself.

“I think for me those who fight for God have to be asked what God needs to be fought for. He is Almighty. In the three Abrahamic religion, He is Almighty. There’s nothing he can’t do. There is nothing he doesn’t see. And if He won’t punish it himself – at least not immediately – then who are you to punish it?

It was an evening of humour, laughter and memories. Ndibe, who displayed a sense of humour, fielded questions not only from Kan but also from the audience. The author read excerpts from his book and in a novel manner asked the audience to take turns to read from it as well. And they did it wonderfully well.

Ndibe spoke about the important roles Professors Chinua Achebe and Wole Soyinka, two writers he is indebted to – had played and continues to play in his life. He narrated an encounter he had had with Achebe while doing his national service as a reporter with the Guardian. After the three hour long interview with Achebe, he discovered to his chagrin that not a single word was recorded by his recorder.

“That story is an amazing story because he and I stayed in his office for almost three hours. I asked him questions and I came back to Enugu. Two of my friends came and they said they wanted to hear Achebe’s voice … I brought out tape recorder, pressed play, nothing. I put in another cassette, pressed play, nothing. I interviewed Achebe for close to three hours and my tape recorder did not catch one word that he said. And I was so in awe of him,“ Ndibe said and the audience roared with laughter.

With great trepidation, Ndibe called Achebe and asked for another interview, which he granted. “Three days later I returned with three tape recorders. So Achebe saved my career,” he said

Ndibe described Soyinka as a man of extraordinary kindness. “Soyinka has done so much for me. So much.” He spoke about the first time he met Soyinka when he and Ohi Alegbe interviewed him after he had won the Nobel Prize in Literature in 1986. He also about the glowing recommendation Soyinka had given him for his first teaching job in America and his crisscrossing about, adding that he always met him in so many airports across the world.

“Sometimes I would be at the airport and I would say ‘let me look around Soyinka might be there.’ And he would be there. He would keep walking. I would chase after him. He would say, ‘ah Okay, let’s go and obtain,’” Ndibe reminisced. “So I have been very, very fortunate. Soyinka has been so kind to me,” he said.

In his speech, Yemi Ogunbiyi, former Managing Director Daily Times, whom Ndibe had described as one of the stars who made the Guardian what it was, went down memory lane, when he said young journalists like Ndibe inspired them at the Guardian, referring to his brilliance. “Stanley Macebuh used to say to me, ‘these young men, they will kill us here.’ So looking back now, they inspired us, not the other way round,” Ogunbiyi maintained.

Responding, Ndibe said with a sense of humour: “This is so moving to hear somebody who was an inspiration in leadership at the Guardian say that we inspired them, I will send you my bank details for the alert. Thank you very much,” and the hall erupted with laughter.