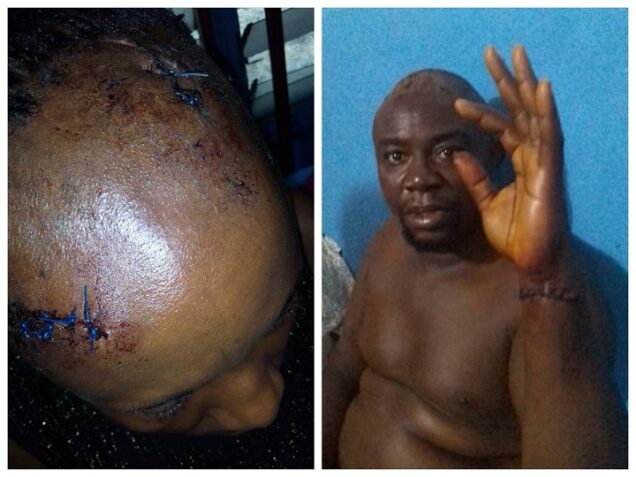 Stanley and Comfort Nwagadi with the injuries inflicted on them with cutlass by Alabo, their landlord in Port Harcourt

Operatives of the Rivers State Police Command are on the trail of a landlord who allegedly dealt several machete cuts on a couple, Stanley and Comfort Nwagadi, his tenants at Ekwulobia Street, Mile One Diobu are of Port Harcourt, Rivers State.

The female tenant, Comfort Nwagadi and her fiancee, Stanley Nwagadi who spoke on their hospital beds said the landlord had always been taunting her for dating and keeping a man she is the one taking care of.

Comfort said on Sunday, May 15 she had spread her clothes on the rope outside when the landlord who also resides in the compound removed and threw them away.

She said when she went to pick up the clothes, the landlord started abusing her as he normally does, accusing her of keeping a man whom she feeds and takes care of.

Comfort added that when her fiancee came in and heard the utterances of the landlord there was an exchange of words between him the said Alabo.

Comfort stated that she and her fiancee left after the exchange of words.

She said unknown to them Alabo was already waiting for them for them with the sharpened machete when they came back.

She said immediately she came entered the compound with her fiancee, the landlord came out with the machete and started cutting her.

She added that when her fiancee attempted to rescue her, Alabo also cut him twice on his head and hand with the cutlass before he ran away.

On his part, Stanley confirmed to our correspondent that he received his own machete blows when he rushed to save his fiancee when he heard her screaming as Alabo was cutting her.

Comfort claimed the landlord developed hatred and envy for her and the husband because she refused his love advances.

Mr Stanley called for justice on the matter.

At the time of filing this report, the suspected assailant is still on the run just as detectives are on his trail.