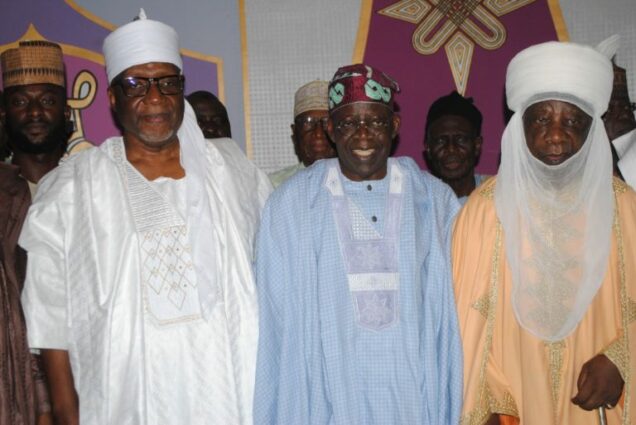 Asiwaju Bola Ahmed Tinubu, the leading presidential aspirant of the All Progressives Congress (APC), has promised to navigate Nigeria’s way to prosperity, if elected in 2023.

Tinubu, a former governor of Lagos State, made the pledge on Tuesday in Ilorin while addressing Kwara delegates at the Banquet Hall of the Government House, Ilorin.

“We are coming up with a lot of programmes, just make me your President. I know better how to do it. I know the way. I can navigate the way to prosperity for people and the nation.

“I can mentor your children for a progressive future. It’s your turn to produce the President. We’ll succeed in this one.

“You have shown me love and that you’ve made up your mind to give me your support.

“I’m here to show appreciation for your support. You have responded to the governor when he asked you where you would stand and you chorused your endorsement.

“I am just too thrilled. I appreciate your endorsement of my ambition,” Tinubu said.

He also promised to settle the lingering political crisis among factions in the state chapter of the party.

Members of the APC in Kwara have been embroiled in crisis since the inauguration of the present administration in 2019.

Tinubu appealed to all aggrieved members of the party to sheathe their swords for an amicable resolution of the crisis.

“We will settle the crisis. This is a family affair. We call on all aggrieved members to sheathe their swords and come back to the fold. We will settle it as soon as possible,” he said.

He appreciated the APC members in the state for endorsing him as their preferred choice, saying that he will not disappoint them if given the mandate.

Tinubu was received by the governor, his deputy, the three serving APC senators from the state, the state and federal lawmakers, among other personalities and party chieftains.

Earlier, Tinubu visited the Emir of Ilorin, Dr Ibrahim Sulu-Gambari, in his palace.

The APC presidential aspirant, who commended Gov. AbdulRahman AbdulRazaq of Kwara for leading a progressive government, promised to work with him to win a second-term ticket.

“The governor, a private person recommitted himself and became a politician that came to rescue the state and put the state on the path of recovery. It’s sure that he would be returned.

“We’ll continue to work together. Never will Kwara State slide back into the hands of termites. We know how to do it,” he said.

On his part, AbdulRazaq thanked Tinubu for being a worthy instrument that made it possible to take power at the centre from the Peoples Democratic Party (PDP).

“This is the first visit of the APC national leader after my inauguration as governor.

“We can’t thank you enough for helping us to take over power in the state. One good turn deserves another.

“It’s not about money, it’s about commitment. We thank you once again. Asiwaju, we’re very grateful.

“You’re different from some other presidential aspirants in another party from the state. Now, we are in good standing from the mess inherited from the past government in education, health, workers’ welfare and so on.