Wike to NBA: You're too docile, can't fight for social change 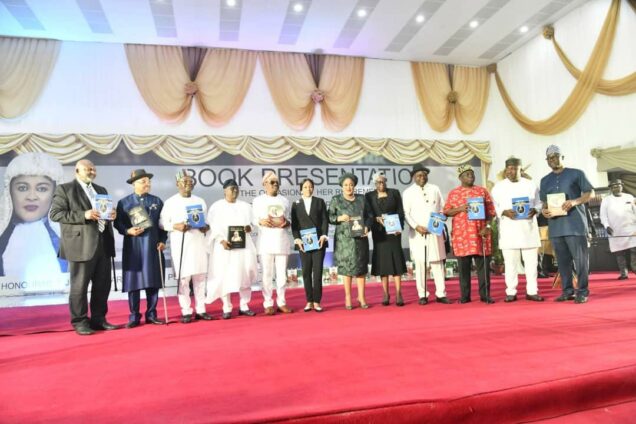 Rivers State Governor, Nyesom Ezenwo Wike has expressed regrets over what he described as the lackluster approach of the Nigerian Bar Association, NBA to social change, saying the situation has not only exposed the body to contempt but is a disservice to the nation.

The Governor said this while urging the leadership of NBA to go beyond issuing of statements to taking concrete actions against attacks on the nation’s judiciary at the book presentation in honour of Justice Mary Peter- Odili in Port Harcourt on Monday.

Wike said, “What is even worrisome on the part of the President of the NBA is his failure to admit that the NBA, including the inner and outer Bar, which he leads, have failed in their responsibility to protect the rule of law and defend the judiciary from punitive intimidation and erosion of its independence by the All Progressives Congress-led Federal Government.

“It is quite unfortunate that the NBA is only good at issuing bland statements of condemnation without more, while the judiciary continues to suffer ferocious bouts of harassment from a Federal Government that has become notorious for its contemptuous attitude towards the rule of law and the rights of Nigerians to an effective justice system.”

Wike also expressed his disagreement with some speakers in last Thursday’s valedictory court session organised in honour of Justice Odili, who laid the blame on politicians over the problems that the judiciary suffers.

Specifically, the governor Wike said Chief Wole Olanipekun, SAN, speaking for the Body of Senior Advocates at the valedictory Court Session, identified corruption as the bane of the Nigerian judiciary and pointed fingers of responsibility at politicians, lawyers and the Federal Government.

He noted that while the learned Senior Advocate is largely correct with respect to the issues of forum shopping by lawyers and the intimidation of the courts by the federal government, he is however, wrong in his allusion to political cases as responsible for the debasement of Nigerian courts.

“Now, if I may ask: are lawyers not behind the contemptuous criticisms of judges by clients? How many lawyers have withdrawn from political cases in protest against unwarranted castigation of the court by clients?

“How many lawyers have withdrawn their services to clients on account of frivolous petitions against the court without their consent? Who are those who advice politicians to reach out to judges? Where are the lawyers that have ever advised their clients against reaching out to judges handling their matters?

“For me, let us stop the scapegoating and tell ourselves the truth that as lawyers, most of us are all involved in this despicable conduct, perpetrating the same evil, only at different levels because of our predisposition for success through backdoor without any regard to the damage we are doing to the reputation of the entire judicial system.”

The governor said the Federal Government had in 2016 unleashed premeditated midnight raids on Judges’ homes, including the Justices of the Supreme Court, in Abuja, Port Harcourt, Gombe, Kano, Enugu and Sokoto States.

“In 2020, when the sanctity of Justice Mary Odili’s home was violated by hired members of the APC over the Supreme Court’s judgment that sacked the party’s governorship candidate for Bayelsa State, the NBA just condemned it, without any further follow-up action to forestall a re-occurrence.”

Governor Wike also pointed out that there was need not also lose sight of the fact that the judiciary is also a problem to itself because it is weak and incapable of asserting and safeguarding its independence from the predatory tendencies of other arms of government.

He noted that when judges are lacking in courage and integrity, they easily give up to improper pressure, influence and control, and the entire judiciary suffers.

Governor Wike assured that if elected the President of Nigeria in 2023, he will work with the National Assembly to prioritize the welfare of all judicial officers, including the provision of official cars and life-long accommodation as we have done here in Rivers State.

“With me on the saddle as the President and Commander-in-Chief, the judiciary in Nigeria shall be in safe good hands and Nigerians will again experience the glorious days of an independent, vibrant and progressive judiciary.

In her remarks, former Justice of the Supreme Court of Nigeria, Justice Mary Peter Odili, noted though Nigerian judges are among the best in the world, they have never been treated right.

“A lot has been said about judges, judgements and corruption and what have you. The truths be told, the Nigerian judges have not been treated right, and the truth has not been said of Nigerian judges who in my view are the very best in the world. I’ve not delivered any judgement and have gone to sleep easily.”

Justice Odili, who was the first lady of Rivers State between 1999 to 2007, expressed delight that some of her judgments have been published for the public to assess.

“I am very happy that some of my judgements have been captured in print. And as I peeped through the judgments of those big judges and magistrates of the old Bendel State, my own judgments are now in the open for everyone to look at. All anyone can say is that she didn’t apply the law properly here, she did not understand the law properly. But, no one can ever say she gave judgement because of an interest in the matter.”

Benue State governor, Samuel Ortom, who spoke on behalf of his colleagues, described Justice Odili as an epitome of humility.

Chairman of the occasion and former president of the Nigerian Bar Association, Onueze C.J.Okocha, SAN, noted that Justice Odili served the country meritoriously, honourably and without blemish to her character.