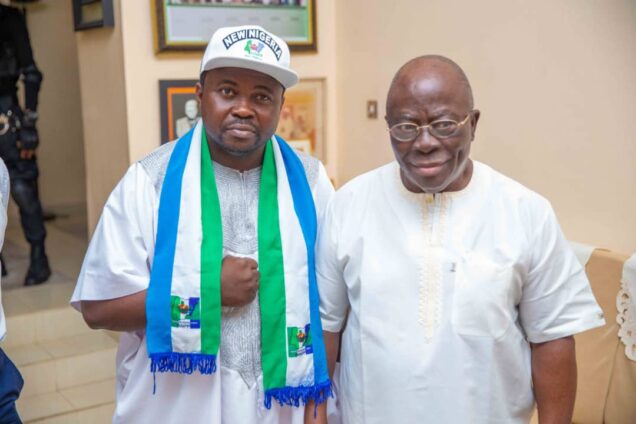 The leader of the pan-Yoruba socio-political group, Afenifere, Chief Ayo Adebanjo, has commended Olufemi Ajadi Oguntoyinbo, a presidential aspirant on the platform of the New Nigeria People’s Party (NNPP), for his courage to step out and compete with wealthy politicians in Nigeria.

The respected elder statesman, gave the kudos in Lagos yesterday when Ajadi and his entourage paid him a courtesy visit.

He said Ajadi’s courage and determination, and the fact that he was a youth deserved commendation, although Ajadi’s quest at this time, may not tally with his (Baba Adebanjo’s) conviction, especially given the principle of fairness.

Taking the team down memory lane to enable them to appreciate his position on which region should actually present the next president of the country, Baba Adebanjo lamented the current political state of the nation, saying Nigeria deserved to be better.

He said the attacks on the administration by the citizenry were a fallout of its inability to meet the expectations of the people, especially the ideology it propounded while coming to office in 2015.

Tracing the current challenge in the country to defects in the 1999 Constitution, he said there was a need to amend it to reflect the realities in the Nigerian socio-political space.

Pa Adebanjo while reiterating his preference for the east to produce the next president on the basis of equity, added however that he had been impressed by Ajadi’s enthusiasm, and youth, and the fact that he had representatives from the different parts of the country in his entourage, was impressive.

He said these had made him feel better about the not-too-young to rule principle, advising the youths in the country to play an active part in the political process in the country.

He however advised them against nepotism but to stand for equity and fairness, which he said were much needed in the country.

Baba Adebanjo told Ajadi that his doors were open to youths like him desirous of bringing about the needed change in the country through elective political office.

Expressing discomfort with the conditionalities set by the major political parties for nomination, he said: “They don’t want the youths to run for the position of President, that is the reason the form of interest is sold at the rate of a hundred million Naira,” he said.

Nonetheless, he said youths should not be discouraged, and that in fact, it would be worrisome if youths would not take over from the politicians right away.

According to him, if the youths could not take over from the old politicians now, it meant that the citizens could die from the perpetual slavery.

“I don’t have houses but one I have is not leaking. I don’t have luxury cars but the one I have can take me to Ijebu and back to Lagos,” he said, reiterating that it was better to play a politics of equity and fairness than any other.

Earlier, the Media and Campaign Strategist to the Olufemi Ajadi Presidential Initiative, Mr. Cami Ezenwa, had acknowledged the sterling contributions of Pa Adebanjo and other elder statesmen in the country saying the visit was to tap from his wealth of knowledge.

He had equally provided a background to Olufemi Ajadi’s quest for the presidency, especially the fact that it had a divine order behind it, backed by a sincerity of purpose in bringing about a change in leadership positions in the country.