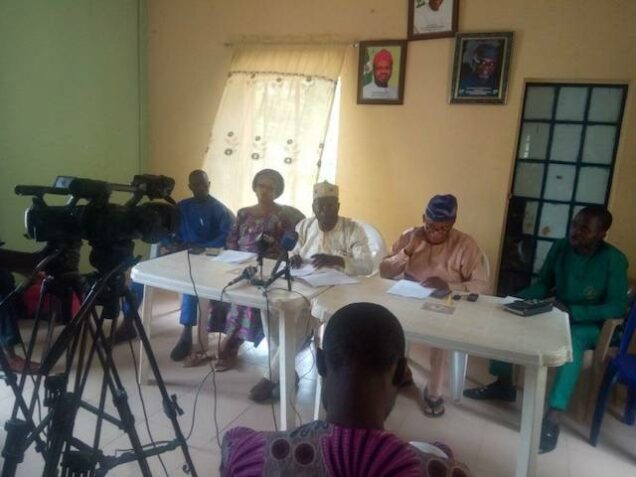 The Chairman of the Action Democratic Party (ADP), in Ekiti State, Mr Abegunde Olakunle, has resigned the party.

His moves comes barely a week after the deputy governorship candidate, Mr Idowu Afuye defected to the All Progressives Congress (APC).

Olakunle, who said this in Ado-Ekiti on Tuesday, at a news conference, denied his purported suspension by the national leadership of the party.

He faulted the suspension letter, saying it was not addressed to him, noting that he only called for a press conference to make comments on it.

He, however, noted that he would have about three months ago tendered his resignation due to alleged maladministration, but cited the negative effects it would have on the party’s governorship candidate, Erelu Kemi Elebute-Halle in the elections.

He said: “Considering the maladministration and unbearable inadequacies characterizing the leadership of the party. I would have resigned my membership about three months ago.

“But I realised that doing so might negatively affect the efforts of the candidate of the party. This is why I decided to endure till the end of the election before tendering my resignation letter.

“However, now that it is the national leadership that goes on air to announce the unwarranted suspension of Adekunle Abegunde of no title, location and address.

“I Pastor Chief Abegunde Emmanuel Olakunle, Chairman of the Action Democratic Party, Ekiti State, ….hereby declare that I drop and quit the ADP. I cease to be chairman of ADP in Ekiti State.”

He went further to say that his resignation did not have anything to do with the ambition of the party’s governorship candidate, Erelu Kemi Elebute-Halle, while not ruling out the possibility of returning to the party.

“I will say that my relationship with the ADP candidate remains very cordial, but wouldn’t know what she feels, to me, I have nothing against her.”

On what is likely to be his next move, Abegunde said, “I will go home and consult with my family and their decision will determine my next step of action.”