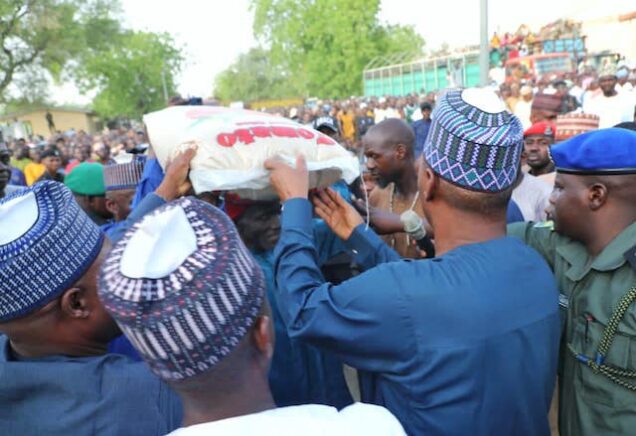 Governor Babagana Zulum has distributed food items and fabrics to 3,000 households to lessen the effects of hardship in the Maiduguri Metropolitan Council (MCC).

Speaking in Gwange Ward, Zulum said the distribution is aimed toward supporting 100,000 residents of MCC and Jere Local Government Area.

Zulum said that the 3,000 beneficiaries were selected from the most vulnerable groups in Gwange I, II, and III Ward.

The governor said that each beneficiary would receive one bag of rice, one carton of pasta, fabric material and N10,000.

He said that Alhaji Akiko Dangote provided the pasta, and commended the businessman for the humanitarian gesture.

”This programme is part of the efforts of the state government targeted at addressing poverty and hunger occasioned by the economic recession in the country,” he said.

He noted that despite the present economic crunch, the state government still fulfils its promises to the people.

“Since we came on board, we have not rested in our task of providing the desired leadership. One of our tasks was to ensure the total restoration of peace so that the people would go back to their normal livelihood activities.

“We thank Allah that peace has gradually been restored and we are hopeful that this year Insha Allah, we shall record the total restoration of peace,” he said.

A beneficiary, Hajiya Yagabana Bukar, lauded the governor for the support noting that it would go a long way in supporting her family’s needs.