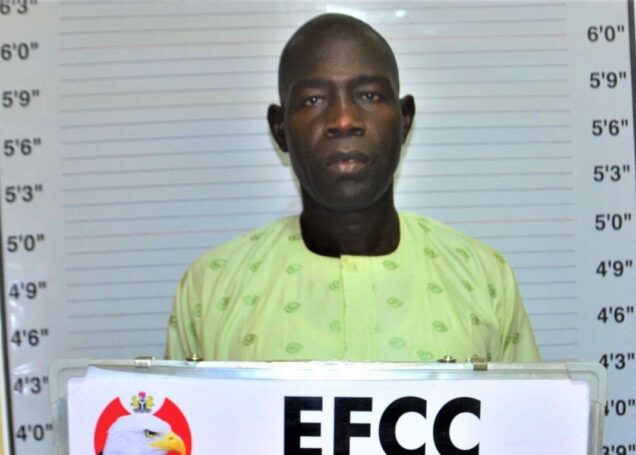 The convict has sold two plots of land to Suleiman Bukar and Abubakar Mala and refused to remit the purchase sum to the owner of the land.

Ali was arraigned on two- count charges for alleged criminal misappropriation to the tune of N570, 000.00 by the Economic and Financial Crimes Commission, EFCC.

The second count charge read: “That you Modu Ali on or about the 15th January, 2019 at Maiduguri, Borno State within the jurisdiction of this Honourable Court dishonestly misappropriated the sum of N270,000.00 (Two Hundred and Seventy Thousand Naira) only, property belonging to one Suleiman Bukar of Dala Shehuri Maiduguri, Borno Stat, being amount for the purchase of a plot of land laying and situate at Masa Malambe behind Bakassi Estate Maiduguri, Borno State and you thereby committed an offence contrary to and punishable under Sections 308 and 309 of the Penal Code Laws of Borno State Cap. 102 Vol. 3 of 1994 respectively.”

However, he pleaded guilty to both charges on Monday, thereby paving way for his conviction.

The defendant pleaded guilty to the count.

Justice Kumaliya thereafter convicted and sentenced his to six month imprisonment with an option of N50,000.00 (Fifty Thousand Naira only).

The judge ordered the convict to return N300,000 to the victim.