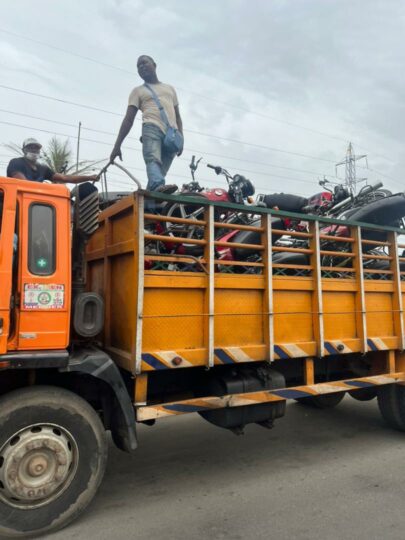 Over 150 motorcycles were impounded on Thursday during a clash between the Taskforce and irate okada riders on Mile 2-Badagry expressway.

The okada riders had blocked the expressway from Mile 2-Ojo and burnt tyres on the road.

They engaged the taskforce operatives out to enforce the restriction of okada riders from plying the area.

There was pandemonium in the area as the okada riders blocked the expressway and hurled stones and wood at the police.

There was a standstill in the area until the police dislodged the riders and took over the expressway.

Benjamin Hundeyin, Spokesman, Lagos Police Command, said over 150 okadas had been impounded and normalcy restored to the area.

“Sequel to the protest by okada operators and total blockage of Mile 2-Ojo-Badagry Expressway today 19th May 2022, Taskforce Crack Squad clamped down on the riders before their action degenerates into state of breakdown of Law and Order.

“Arrests have been made, over 150 motorcycles impounded and illegal shanties on that route demolished.

The okada riders excuse is that they can do anyhow from now till June 1, 2022, and decided to protest, forgetting that they are not to be on highways in the first instance,” he said.