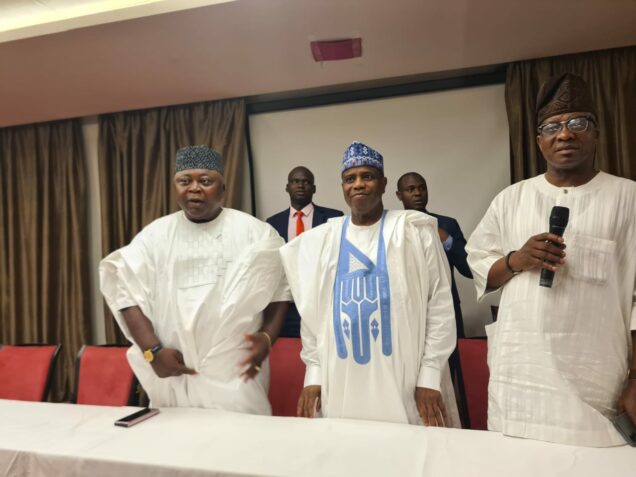 A presidential aspirant of the Peoples Democratic Party, PDP, Governor Aminu Tambuwal, has revealed that as part of his restructuring plans, he would strengthen and expand the South-West Regional security Network popularly called Amotekun as well as restructure the country.

Governor Tambuwal disclosed these on Wednesday while engaging delegates of the PDP  in Osun and Ogun states respectively.

Governor Tambuwal who spoke at the PDP secretariat in Osogbo on Wednesday said insecurity is a big issue and strengthening the South-West Security Network for proper policing and possible adoption as state police is a major part of his plan.

In his words; ” Insecurity is a major issue across the country and for the south-west and as part of my believe in restructuring, I will strengthen Amotekun and possibly adopt it as a state police for the region.”

Speaking on restructuring, the governor said the nation cannot shy away from restructuring even though it means different things to different people.

“Restructuring differs across the regions but we must come forward and argue it. I present my fact, you present yours and we find a common ground to achieve it. Devolution of power to states is a must if we must progress in Nigeria.”

The governor who later proceeded to the residence of Senator Demola Adeleke, to congratulate him on his affirmation by a federal high court in Osogbo as the validly elected candidate of the PDP for the July 16 governorship election.

In Ogun, the chairman of the PDP governors’ forum said providing a conducive business environment to expand industrialisation in Ogun as well as agriculture are his plans for the state should he emerge as President of Nigeria.

“Honourable Ladi Adebutu is here and he can confirm that a conducive business environment is what businessmen need. This I know and I will ensure I provide for proper expansion of industrialisation in Ogun state. Of course like I said in Osun, State police is a must. We must give more powers to the states if we must develop as a nation.”

Engaging the delegates further, the former speaker said he has the right qualities to lead Nigeria and want the delegates to vote with clear mind devoid of sentiments.

“I’m well qualified to lead Nigeria. With my background as a lawyer and a life bencher, 12 years of legislative experience and 7 years as governor of Sokoto State, I know what the issues are and i will assemble the best team across the length and breathe of our Nation.

He added that he is a team player and “my colleagues who served with me in the House of Representatives can serve as my referees. I ran an open, transparent House. I will do that if you elect me as our party’s candidate”.