Nnamdi Kanu not the cause of insecurity in South-East: Primate Ayodele 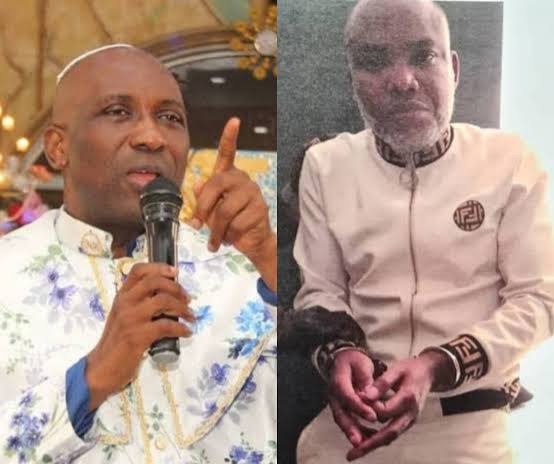 Nnamdi Kanu not the cause of insecurity in South-East: Primate Ayodele

The Leader Of INRI Evangelical Spiritual Church, Primate Elijah Ayodele has advised the Federal Government of Nigeria to release IPOB leader, Nnamdi Kanu because he isn’t the cause of insecurity in the southeast zone of the country.

The cleric made this statement during the commissioning of a road he constructed in Oke-Afa, Lagos state.

He noted that the basis of the attacks in the South East is a result of the grievances from the people on how they have been prevented from getting into power.

The man of God noted that the government will soon understand it and that Nnamdi Kanu will be released soon because keeping him in prison will not add value to peace in the southeast zone.

He mentioned that Kanu can help the eastern governors tackle insecurity if they all seek his release, noting that he can’t bring disintegration to Nigeria.

‘’Nnamdi Kanu will soon be released. The basis of attacks in the South East is a result of grievances from the people on how they have been stopped severally from getting into power, keeping Kanu in Prison will not add value to the peace of the Zone. It will be delayed but he will be released very soon’’

He reinstated that Kanu isn’t the problem of unrest and should not be allowed to suffer for it.

He then called on the government to settle the issue of sidelining the Igbos from power especially in 2023 for peace to reign.

‘’Governor Soludo has taken a very good step by visiting him, this is what southern governors should have done for the sake of peace. Other governors are selling their ethnicity for nothing, the northerners will never do that.’’

‘’Kanu is not against any government, the government just doesn’t know how to handle his matter, his case doesn’t need jail, it’s a small thing. Kanu cannot be a terrorist, all that is needed is dialogue.’’

‘’Nnamdi Kanu is not the problem of unrest in South East, he should not be allowed to suffer for it. Igbo is already in crisis, they are no longer in the political setting of Nigeria and this will still create more problems, these are the causes of agitations and unrest, not Nnamdi Kanu. The government should address the real issues because this unrest won’t stop until it is addressed’’

Furthermore, Primate Ayodele spoke on the disintegration of Nigeria, while explaining that what will be, will be and no one will be able to stop it when it’s God’s time.

‘’Nigeria will divide peacefully when it’s time, What will be, will be. God has shown some people what will become of Nigeria and when the crisis begins, nobody will be able to stop it, it’s just about time, they should release Nnamdi Kanu, he is just suffering unnecessarily. If the government want peace, let them address the issue of sidelining the Igbos’’