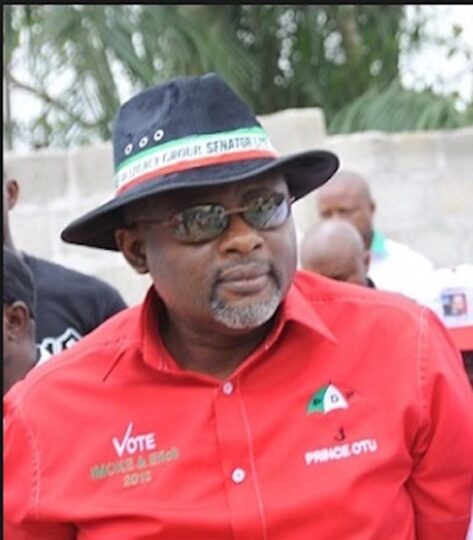 The panel headed by DIG Suleiman Fakai disqualified Otu following several petitions written against him, regarding his certificate and record of past conviction.

According to PMNEWS sources, one of the petitions dated 14 May was submitted by Messrs B. Dakum and co, a firm of lawyers.

Although the committee found no evidence of Otu’s conviction, it found his academic credentials questionable.

Otu could not produce his first leaving certificate nor his WASC. He could only produce his secondary school testimonial.

” In the circumstance therefore, the committee has no option than to declare this matter as inconclusive”. the panel reported.

He was born 18 October 1959 and claimed to have attended University of Calabar, according to a Wikipedia profile.

Before he was elected senator in 2011, he represented the Calabar Municipal/Odukpani constituency of Cross River State, Nigeria in the Federal House of Representatives from 2003 – 2011.

He was elected Senator for Cross River South in the April 2011 elections, running on the People’s Democratic Party platform.

On 10 May, Otu was announced the consensus candidate of the All Progressives Congress (APC) for the 2023 Cross River governorship election.

Publicity secretary of the APC Erasmus Ekpang, said Otu was announced the consensus candidate out of 18 that planned to succeed Governor Ben Ayade.

This, according to Ben Ayade, followed a unanimous decision by 17 aspirants in Abuja, in the early hours of May 10 after a meeting of all the 18 aspirants, party executives and others that constitute the state caucus.

The statement reads: “Ahead of the 2023 general elections, a leading aspirant, Senator Bassey Otu has emerged as the consensus candidate of the ruling All Progressives Congress (APC) in Cross River State.

“His emergence as a consensus governorship candidate was the unanimous decision by the 17 governorship aspirants and party critical stakeholders”.

“The meeting, which was presided over by the state governor and leader of our great party, Ben Ayade, had in attendance the state chairman, Alphonsus Ogar Eba, other exco members and the 17 aspirants under the platform of the APC.

“The meeting of the party, which held at the Transcorp Hilton Hotel in Abuja was a congenial political family meeting which resolved to donate power to Bassey Otu to fly the flag of the party.”