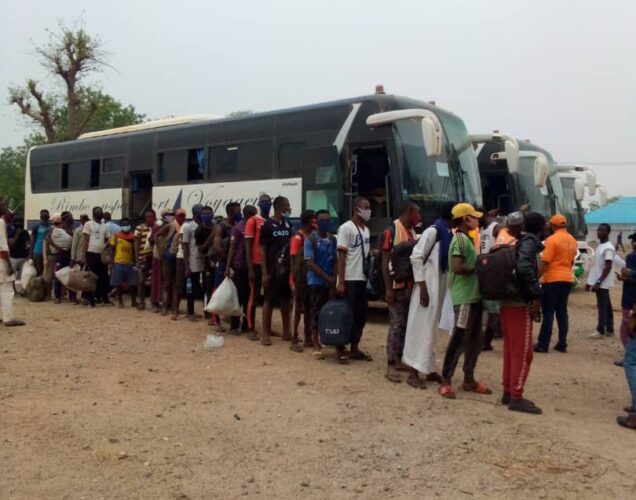 Nigerians repatriated from Agadez, Niger Republic on arrival in Kano on Saturday

Not less than 129 Nigerians stranded at Agadez, Niger Republic have been repatriated back to the country in three luxury buses organised by the International Organisation on Migration, IOM.

The stranded Nigerians were received by officers of National Emergency Management Agency, NEMA in Kano on Saturday.

Dr Nuradeen Abdullahi, NEMA Coordinator, Kano Territorial Office, who received the returnees said they were on their way to Europe before they were stranded in Niger Republic.

“The returnees were brought back through a voluntary repatriation programme for those who left Nigeria to seek greener pastures in various European countries but could not get to their destinations and became frustrated,’’ Abdullahi said.

The coordinator added that the returnees included 125 male, two female and two toddlers.

According to him, the returnees are from different parts of Nigeria; some from Kano, Gombe and Anambra states.

He added that they would be trained for four days to be self-reliant and would be given grants to start new lives.

The returnees were given toiletries and clothes and fed on arrival

One of them, Ummi Aliyu from Kano State, a widow and mother of nine, said she travelled with two of her kids up Algeria for greener pasture.

“I am a widow; that was why I left my seven other children in Nigeria to travel outside the country to get enough money to take good care of them,’’ she said.

Another returnee, James Kelechi from Anambra, said that he operated a medicine store before he left Nigeria in search of greener pasture.

“My business was not moving fine; that was why I decided to travel to Italy in search of greener pasture,’’ he said. (NAN)